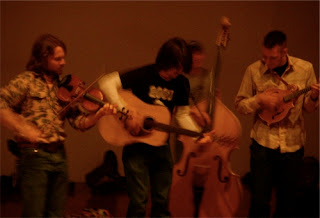 The last few nights my social calendar has been surprisingly full. At dinner Thursday there was a notice that Fox Hunt, an old-timey, bluegrass band would be playing in NorthLight after the slides. This time the slides were by LeeAnn Mitchell, the iron instructor & her visiting artist husband (whose name I don't remember). He's here to help build the molds for the iron pour next weekend.

And after slides, Fox Hunt did indeed pull out their instruments & proceed to play. It had to be one of the oddest music settings I've ever been in - NorthLight is simply a big white box of a room. Slides are projected on a white wall. The only interior features are the doors and rows of folding chairs stacked against the wall. But the acoustics are surprisingly good, and the music was fantastic. Foot tapping, hand clapping music. Turns out they're friends of one of the new core students, and they were traveling from one gig to another, so they stopped over here for a day and agreed to play. They played for two hours straight. And I think I danced nearly that long. Too much fun! They stopped playing about 10:30 & I wandered off towards a shower and bed. Turns out that they simply migrated to the Iron studio and continued playing there until almost 2:00am. Good thing I didn't know about that at the time!

Friday was the gallery opening for the new show featuring works by the Summer instructors (with a small room for Spring concentration instructors). I don't think I've ever seen such a diverse, eclectic show. It definitely highlights the wide range of classes Penland offers!

After the opening, I ended up hanging out on the porch of the Craft house, shooting the breeze with some other students from the clay & wood studios. Careen brought wine, and Keith provided cups, and we all sat in rocking chairs (this is North Carolina after all!) and told stories and hung out. Then we wandered over to the kilns, where they were doing a waste oil firing. It does not smell like french fries. I wonder how it'll turn out.

And last night the Glass Studio hosted a swinging party, with mojitos, and a barbeque (for those who hadn't had enough at dinner) and great dance music - a crazy blend of anything and everything. I worked in our studio until about 9:30, then headed over for a little while. I don't think I've ever been quite this social in my entire life.

People are moving a little slow this morning - there were about 10 of us at "mini-breakfast". I mainly went because I'm a little leary of the potluck brunch that's supposed to be happening a little later this morning. But I'm looking foward to the Easter Egg hunt. Hope I find at least one egg! :)
Posted by Karen Williams at 6:36 AM