That's my total word count so far this month for my annual attempt to write a novel, a la Nanowrimo (National Novel Writing Month).  The challenge is to write 50,000 words in 30 days. No holds barred, damn the torpedos, just get the story on paper as a first draft that can be edited later sort of writing.  This is my third year and like both previous attempts, I'm coming from behind for my win.

The last several months have been crazy busy; putting together samples and handouts for new classes, working on several beading patterns, dealing with unexpected vacancies at my rentals, and just life in general.  You know how it goes.  There was an entire week early this month that I literally could not find the time to write despite my intentions to write a little every day.  At my worst, the Nano stats helpfully informed me that "at this rate" I'd be finished by December 20th!  Ouch!

But life has started to calm down, and as of last week I've managed to carve time in the early mornings and late evenings to write. And since we stayed home for Thanksgiving, I've dedicated this weekend almost entirely to my novel (No Black Friday shopping for me - I'm writing!)

Are there other uses I could make of my time?  Most certainly - I've been putting in 60+ hour work weeks for over a month now, trying to catch up. My to-do list is still about a half-mile long.  Which is exactly why I'm set on carving out this time for myself.  One month.  Early mornings.  Evenings.  Weekends. Mine.


While I "won" in both 2009 and 2010, I have never actually finished a novel.  In fact this is the first time I've made it past the half way point in my plot.  So beyond the 50,000 goal set by Nanowrimo, I have my personal goal of finishing my entire story.  Will I finish it by November 30th?  Considering how much of the story is still left to tell, the jury is definitely out.

But I'll be writing fast and furiously again tomorrow, and for the next few days.  The word count graph turns off at midnight on Wednesday.  Just how far can I get between now and then?  And if I still haven't finished my story, I'll let myself keep writing through next Sunday, because I will finish the story, as trite and ungainly and misshapen as it might be.  There's something powerful about finishing a project, especially one on this scale.

To add a little pressure, I was crazy enough to sign myself up for a pitch workshop on December 7th sponsored by Createspace.  And now I've told you to make it harder to back out.  I'm supposed to pitch my novel to two separate editors as "part of a round table format" for new authors.  Why?  Because I want the experience.  My fiction writing may never be publishable, but I want to know just how far I can go.  And it's never a bad idea to practise presenting my ideas.

Today I wrote 6,243 words.  I think that might be a personal record.  My brain is pooped, so I thought I'd write a blog post.  Go figure!

So my question to to you is this: what crazy artistic endeavors have you always wanted to try?  And what would you need to have happen to let yourself go for it?
Posted by Karen Williams at 10:05 PM 1 comment:

A Little Something Special 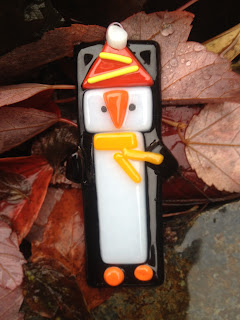 I recently received a wonderful little package from JJ Jacobs, my bead soup partner from last winter.  According to her most recent blog post, she creates a new fused-glass ornament design each year.  And this year I was lucky enough to receive one in the mail!  Don't you just love my little penguin?  I know I do.

I don't yet have a tree to display him on, so I took him outside and photographed him with some fall leaves. As you can see, it's a bit damp out, but penguins don't mind the rain.  And later on, I'm sure he'll look equally wonderful on our tree.

Thank you JJ! He makes me smile.
Posted by Karen Williams at 4:16 PM 2 comments:

Bobbie of Beadsong Jewelry is the winner from last week's blog post celebrating my 500th book sale on Amazon.  Popping by her blog to drop her the note,  I discovered her latest post.  Her title summed up my last few weeks brilliantly: "Why Yes, I Have Been Living Under a Rock...".

I keep hoping that life will settle back down into a more normal commitment load.  But considering the season, I think I'm pretty much along for the ride.

I've also decided to send smaller goodie packets out to the all the other lovely souls who helped me celebrate.   I've sent private messages to all of you except for KipperCat, whose profile doesn't include an email link.  If you happen to see this - drop me a private message with how to reach you!  ;)

And on an entirely different note, if you happen to be in Seattle tomorrow evening, you might want to attend the NW Bead Society's monthly meeting.  Teresa Sullivan, "putting beads where they don't belong since 1994," will be the speaker.  She is a storyteller with her work, incorporating a wide variety of bead weaving techniques to match her visions.

A new first for me:  I'm on Etsy!  With exactly one (yes 1) item.  Off to a grand start!
So what's my first listing?  My lovely Snowflakes and Stars tutorial, available as a pdf download.

I took the free instructions from my website, and reworked, expanded, polished, cleaned and added a whole slew of new diagrams and turned it into a 7-page handout for the class I taught last week at Fusion Beads.

While teaching, I watched how my students used my handouts,  I took their feedback and reworked the tutorial yet again, expanding it out to 10 pages, which is the iteration available here.

Unlike with freeform peyote, I actually give step-by-step instructions (including bead counts!) for the basic snowflake.  From there my true nature reasserts itself and I include lots of ideas and diagrams for what you might do to make your snowflakes truly your own.

Now it's time to work on the class handout for my Lacework Bracelet before my class next week, which is what I should have been doing instead of editing this one more time and posting it to Etsy.  But snowflakes are so Seasonal!  And now I have something to blog about.   :)
Posted by Karen Williams at 4:21 PM 1 comment: 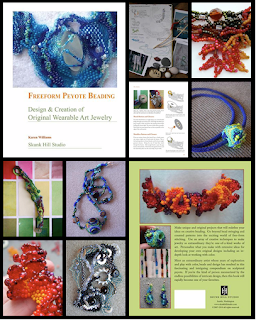 At the end of October, I discovered that's how many copies of Freeform Peyote Beading have sold through Amazon!

There aren't enough adjectives to describe my excitement at discovering that I had indeed broken the five hundred mark on sales.  A happy dance was definitely in order.

Seems that it's definitely time for a celebration! I thought about breaking out the champagne, but that's kind of hard to share over the web.  My next thought was to do a give away on my blog (I love the anticipation of signing up for them on other people's blogs, even if I never win).  My husband disagreed, and said I should just share how excited I am.  But posting a u-tube video of me bouncing around the room seemed a bit much, so instead, I'm doing a give-away.

Since I'm celebrating my book, I thought I'd give away a goodie bag filled with beads - seed beads, accent beads and at least one focal as well as a button clasp - enough to make a freeform peyote bracelet.  I'll even throw in a copy of my book if you don't already have one.

So if you want a chance to win, just post a comment (and make sure I have a way to reach you).  And if you have a favorite color/colors, let me know that too.  For extra credit (and an extra chance to win) if you already have a copy of my book, tell me which is your favorite piece in the book and what you like best about it.  Or I'll even let you visit my project gallery and tell me your favorite there to get that extra chance.

I'll draw a name on Wednesday the 16th.