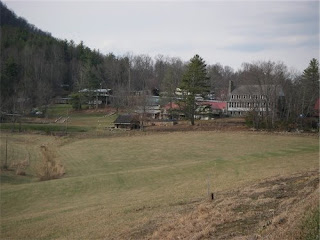 Chatting with Joe this weekend, I realized I haven't talked about the grounds here. Penland is nestled in a U shaped valley, tucked into the edges of the woods. Its a bit hilly, and some of the studios are a bit of a hike. The wood studio is at the top of the road, and they get some exercise just going to their studio. The textile studio, on the other hand, is right across from my dorm, so I can just about roll out of bed and into the studio. Easy peasy.

There's a single main road that runs through the valley, just below campus and separating campus from the llama field across the road. This is a picture of the campus from a little ways down the road taken Thursday on the way back from the Bringle's studio open house. The white building to the right is the Lily Loom building, where our studio is located. The red roof just to the left is the clay studios. The field in the foreground is home to two llamas. 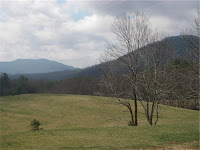 This evening I ended up having to cut across llama hill. I was out for a ramble with a few others when we realized we were almost late for the sheet exchange - the one hour time slot on Sunday evenings when you trade your sheets for clean ones. So we booked it back to campus and the most direct route was through the llama field. I can now tell you that llama hill is taller than it looks! And I didn't even get a close up look at the llamas. They were off hanging out somewhere else.

Spring is a little behind Seattle. Crocuses and other small bulbs are just starting to bloom, though I saw a couple of daffodils as well today. The biggest surprise are the native rhodies. They're as large as any I've ever seen in the North West - some are at least 12 feet tall. I hope they bloom while I'm here!
Posted by Karen Williams at 5:43 PM