Full to bursting - that seems to be the theme, heading out of Thanksgiving weekend.  Tables loaded with food, homes filled with family and friends, tummy's full of turkey and all the fixings.

And now my Etsy store; overflowing with beading goodness.  More beading goodness than ever before (and possibly ever again), topping out at a grand total of fifty one separate listings.

My focus is in a state of transition. I think I know where I'm going - into larger scale, freeform beaded sculptures.  There are also a couple of book projects I'm mulling over.  In order to clear space (both mentally and physically) for my new work, I've decided to divest myself all of my beading kits, including several that I've made specifically for in-person workshops in the past.  It's time to find new homes my beading kits. Once these are gone, I'm not planning to make more.   Time for a change!

If you've ever wanted one of my kits, this is a great chance, although quantities are extremely limited.  I have one or two kits left in many color ways and designs. Here's a few highlights of what's available:

Catch of the Day Pendant and Necklace.  This design started with a right angle weave bezel around a flat, oval stone.  You can guess what happened next; I had to see if I could turn it into a fish.  And this pendant/necklace was born.  I particularly love the fact that since the fish lays flat, you have two different 'faces', and they don't have to be the same.  It's a two-for-one design!  I also love the 'fishing floats' made from felted beads with beaded bead caps.  I have kits in bright fiesta colors, in blues & greens, and as a stand-alone pattern.  (If I can find the felted beads which seem to have gone walk-about, I may have a couple kits in the black & silver colors, too)


Fancy Fish:  I have kits in three color schemes, and have also listed some turquoise-blue dyed magnesite and red-dyed magnesite core beads. 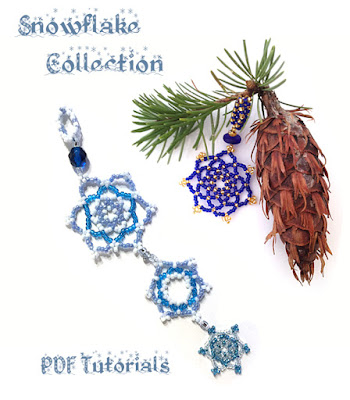 Snowflake Chains: I just finished updating this tutorial, and am now offering it as a stand-alone pattern.

I've also updated Snowflake & Stars; cleaning things up, and adding some additional inspiration/gallery photos.  If you've already purchased the pattern, email me and I'll send you the update.

The Snowflake Collection includes both of my Snowflake patterns at a reduced price.

If you already own my Snowflakes and Stars tutorial and would like the Snowflake Chain Ornament, I'm happy to set up a special, half-price listing especially for you.  You'll also find the last of my Snowflake Kits in Cobalt & Gold, and Peppermint Twist. 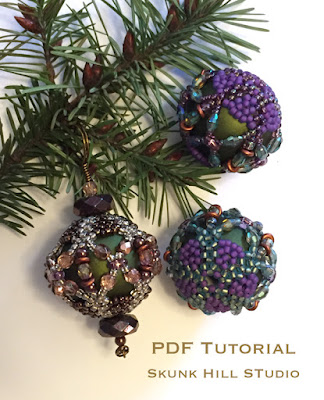 I've updated my Criss-Cross Lantern Beads tutorial, and am offering it as a digital download.  Or you can pick up a free copy of my Lantern Bead tutorial with purchases of my second paperback, Corsets, Caps and Stays: Elegant Beaded Beads with Right Angle Weave.

I've also listed a number of kits featuring my original Corset Beads right angle weave beaded beads.  You'll find singles in several colors and a couple of sets, including my favorite Yule Tidings Collection, which has everything you need to create six holiday beaded beads, and quickly turn them into ornaments or pendants.

Prefer my Personal Planets freeform peyote beaded beads?  I have kits in my Quinacridone Summer and Sea Breeze colors.  In my Beading Supplies section, you'll find sets of the 26mm round core beads I use for my beaded beads. 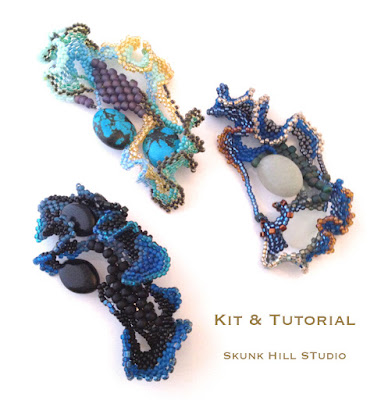 Speaking of freeform peyote,  I have three kits left for my Ocean Currents bracelet.  Please look closely at the second image in the listing as the lampworked beads included in the kit are similar, but definitely not the same as what I used in my original cuff.  I got as close as I could, but....

And if you're interested in freeform peyote ruffles, I have a small number of brooch kits leftover from a workshop I taught a while ago (Dragon Thief and Ocean Shores).  These have the exact beads I used in my Underwater Fantasy Stone Brooch series in Explorations.


Once a kit sells out, there likely won't be any more (maybe an occasional onsie-twosie leftover if I prep kits for an in-person workshops).  Kits will only be available on my Etsy store through Thursday, December 15th.  My last shipping day will be that Friday. After that, I'll still have all of my ebooks and automatic downloads, just nothing that requires shipping.


Posted by Karen Williams at 12:03 PM No comments:

Exploring China - Beijing and the Temple of Heaven 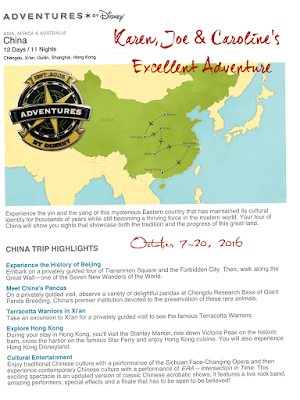 My mother-in-law had always talked about wanting to visit China.  It was at the top of her bucket list, but for one reason and another she had never made it.  So almost two years ago, I started making plans.  And last month they came to fruition as Joe and I joined her on a two-week, Adventures by Disney, tour of China.

Why Adventures by Disney?  The easy answer is Disney knows how to do logistics better than almost anyone else, and that I trusted the Mouse to get me into and out of China safely.  I loved their itinerary - the tour included five internal flights spanning a huge hunk of China.  There is no way, absolutely none, we could have done everything we did in the same amount of time if we'd gone on our own.   I also liked that they offered a tour in October.  October is the off-season for China tourism, but all of my research indicated it was likely the best season in terms of heat, rain, and air quality.  Finally, neither Joe nor I had ever gone on a group travel tour previously, but we had high hopes for the type of travelers a Disney tour might attract.  The tour met every one of our expectations and more!

We technically arrived a day before the tour.  We lost a day during the flight over, so we left Friday, mid-day, and arrived Saturday evening, 27 hours Beijing-time after we left Seattle (12 hour flight + 15 hour time difference).  A Disney rep met us at the airport and drove us to our hotel, where we pretty much fell into our beds, only to keep waking up throughout the night as we tried to adjust to the time zone shift.

The tour didn't officially start until Sunday evening, but we got to meet our Adventure Guides early that morning.  They gave us several sightseeing suggestions, including the Summer Palace and the Temple of Heaven.  We decided to visit the later, so off we went in a taxi.

Very few taxi drivers speak any English.  We learned that before you get into a cab you need to have someone translate the destination into Chinese.  All of the hotels we stayed at had special cards with the name of the hotel written in Chinese and English on one side and a list of popular tourist destinations on the other.   These were essential, and made getting around on our own so much easier.  Fred, one of our Adventure Guides who happened to be from Beijing, also wrote a special card warning of my food allergy, in case I decided to eat out on my own.

The Temple of Heaven was the imperial religious complex, where the emporer and his entourage would come to pray (and sacrifice) for beneficence for the coming year - good harvests, good weather, good fortune from the heavens.  Today, it's both a tourist complex, and used as a community park by local residents.


The main altar is centered in a huge stone plaza.  The altar itself stands several stories tall; concentric rings constructed of white marble.  As you climb the stairs to each ring, you are surrounded entirely by stone. The courtyard is paved in stone, encircled by tall stone walls.  There are no trees or plants and it's very austere, relieved only by the intricate design work and stone carvings.  It's a very 'official' sort of place.

Something I had trouble with was the sense of perspective.  Standing at the entrance to the altar's courtyard, the altar seemed fairly squat - not too tall.  But appearances are deceiving in China.  The courtyard was so large, it made the altar feel small.  As we walked up to it, it grew larger and larger.  I had this same experience over and over during our tour through China, most notably in the Forbidden City.

From a distance, the Temple of Good Harvest looks a lot like the imperial altar, with the obvious addition of the temple at the top of all the stairs.


We exited the temple courtyard into another stone-paved, stone-walled courtyard with magnificent, carefully-tended cypress trees regularly spaced along its length.  Then we spied a round portal in one of the walls, an ancient cypress standing sentinel. 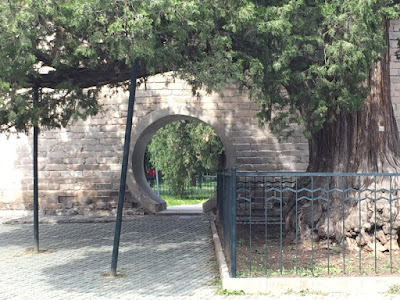 Walking under the arch of tree's branches and through the gate, we found ourselves in a carefully tended 'wild' space filled with trees, grasses and hundreds of little birds.  It felt a little like walking through the wardrobe into Narnia.  Watching the little birds flitting between the groundcover and the lower limbs of the trees made me think of traditional Chinese paintings that capture a wren or chickadee with a few brush strokes.
The dichotomy between the two sides of the wall was tremendous and was something we'd see time and again during our tour of China.  The differences between public and private. The stone austerity of places of authority, of man, and the carefully cultured wildness in the inner courtyards; places for peace, for the healing powers of nature.

Behind the woods lay a series of more formal gardens, which is where we found this lovely little temple.


That evening, we got to meet our fellow adventurers over dinner back at our hotel.  During desert, a small troupe of acrobats ran into the room and performed for us, flipping and tumbling through the air.  We then got a chance to take pictures with the Monkey King and his followers. 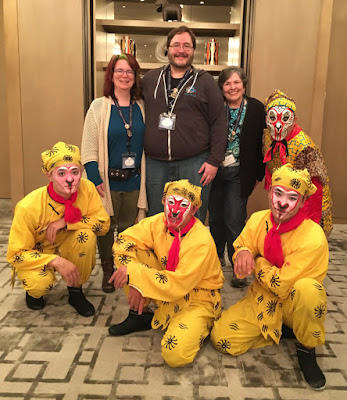 And that was our first full day in China!

Posted by Karen Williams at 8:03 AM No comments: