Back in December I hosted my first  Ornament Swap and Blog Hop.  It was great fun, and I think everyone was pleased with the ornaments they were sent.  Except for one package which decided to take the slow boat to it's final destination.  I am so pleased to announce that it did indeed arrive, and was totally and completely worth waiting for!  I'd like to present the extremely-talented Carrie Johnson's gorgeous design:


Carrie also sent a fantastic write up, so I'm going to include it here, verbatim:

"After several back and forth emails, I had a better idea of what Karen might like in her ornament.  First, I had to find the perfect color combination that used jewel tones, but that would also have a slight Victorian overtone.

For the seed beads I went with bronze and wine metallic colors in addition to the cabaret permanent finish for the center herringbone section.  I used both Lt. Siam and Garnet Swarovski crystals.  Originally I tried to use royal blue on the outside of the arms in the ornament – but it just kept fighting me.  I even tried to use blue for the center Swarovski rivolis but they just didn’t pop and instead faded into the background.  So, I finally took the blue out (even though I wanted the contrast) and things finally came together.


I had the idea of creating an open shape which you could look inside to see the middle – and you can see the resulting ornament.  It was made using one of my favorite stitches – a variation on cubic RAW in addition to CRAW, herringbone and peyote stitch.  I tried adding fringe and dangles from the bottom of the ornament, but it was just a distraction (and would probably get caught in the tree anyways).  In the end – I was thrilled to have everything fall into place with the ornament being very elegant and clean, utilizing Victorian colors and shapes, but at the same time giving them a modern twist.  It is my hope that this will become one of Karen’s Christmas ornament treasures! "

The finished ornament has a wonderful three dimensional effect that reminds me of a lantern, while the colors she chose are indeed perfect!

Carrie was gone for several days right around the time that I sent her package, and she wrote that when she returned "there was a package just waiting to be opened by my front door.  I stared at it for several days, just dying to open it.  But, I thought it would only be fair to wait until the package that I sent to Karen, my wonderful ornament exchange partner, had been delivered."

How sweet was that?  Her package arrived around 5:00pm on Christmas Eve (yes, I've had it awhile, I was waiting for her write up to make the post and time got away from me!)  But I absolutely love  Carrie's design, and the colors.  It did NOT get packed away with the regular holiday ornaments, but is decorating my workspace as I type.  Today is another chilly, rainy Seattle day, but Carrie's ornament makes me smile!

And luckily, Carrie enjoyed the little Happy Fish that I sent to her as well; "As for the secret ornament in my package – what an awesome surprise.  My “little” fish is just stunning, using my two favorite colors - green and orange.  In addition, it uses an island theme which has become a featured part of my holiday decor since moving to Hawaii.  I’m honored to have received such a beautiful, handmade ornament – I will truly treasure it!"

Phew!  The little guy was so different from my normal holiday ornaments that I'll admit to being a little scared that Carrie would look at it think I'd gone crazy.

Before I end this post, Carrie also shared several pictures of her ornament in progress:


Oh, and Carrie also let me know that she was indeed the one who sent me the honu cookie cutter!  Mystery solved.  She wrote that she "went to over 10 local stores and specialty stores, and NOBODY had any Hawaiian themed ornament cutters.  It was crazy, I finally had to order one from the mainland and have it sent to you."

Thank you Carrie!  This was one of my best Christmases in a very long time, and partnering with you for the Ornament Swap had a lot to do with it.  Making and receiving handmade gifts, it truly is powerful.
Posted by Karen Williams at 9:05 AM No comments: Links to this post


2016 has been a bit of a slow start in terms of my own creativity, so I thought I'd share the work and artistry of one of my favorite people in the world, my sister Shawna.

Last Christmas (2014), Shawna shared that she'd been working on a present for me, but it wasn't 'quite' done, and asked if I'd prefer to receive what she'd accomplished to date, or whether she should continue working on it.


In one of my clever moments, I asked which she would prefer.  Smart, smart, smart!   She said she'd like to keep working; to which I smiled and agreed wholeheartedly.

In early December, I had a chance to fly out to visit family.  The last night of the visit, Shawna brings out this HUGE wrapped present, with her boys 'helping' her carry it and grinning from ear to ear.  The box was big enough to fit my 8 year old nephew - I know this because he hid in it later and my brother brought me my new 'gift' - to much giggling from my nephews.

I thought maybe she was working on a new afghan.  There was indeed an afghan at the top of the box - one of my sister's original designs, shading from deep ocean into the shore, with sand and sea foam around the edges.  In the color transitions, she crocheted beautiful wave patterns to continue the theme.

Under the afghan, I found an entire menagerie of crocheted ocean creatures.  Some so small they fit in the palm of my hand!  Here are some closeups:

She says that in the beginning, most of the designs came from free patterns off of the Internet.  But as she worked she began to develop her own designs as well.  Everyone then told stories of watching Shawna work on them at family gatherings over the past two years.

Luckily, I'd brought an extra suitcase filled with Christmas presents for my family.  I'd hadn't planned to bring it back home with me.  On the return trip, I packed all my clothes in it and all of my new friends into my carry-on bag.

This little guy to the right managed to escape the confines of the suitcase, and hung out with my while waiting for our flight.  He managed to amuse more than one fellow passenger, especially when a few of his friends started peaking out as well.  There was no way I was trusting them to the airlines!

Back home,  my newest friends made themselves right at home under the Christmas tree. 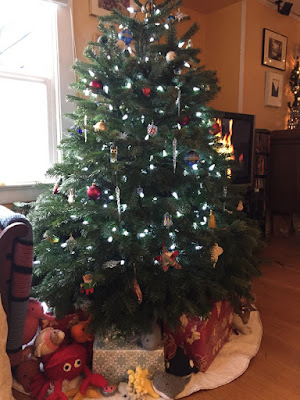 After presents were unwrapped, it looked like they were all fleeing the scene.  The little clam/pearl had abandoned its shell and the crab was fleeing towards the front door.

Normally, after the unwrapping, the Christmas tree looks pretty bare.  Not this year!  Once we'd rounded everyone back up and put them back in place, they kept the tree looking quite full and festive until it was finally time to say goodbye to Christmas.

I haven't decided where their every day home is going to be.  Right now they're slowly migrating through the house.  Popping up here and there as Joe and I make little surprise appearances for each other.  A shark peaking out from a cupboard, a wolf eel keeping close watch over a laptop, the skate guarding the remote, ready to watch tv.  That sort of thing.

Thank you Shawna!
Posted by Karen Williams at 10:20 AM 4 comments: Links to this post