Sunday, I finally had the bright idea of doing a google search for 'tracking amazon rankings'. Turns out, there are number of options. Some are free, some by subscription. Some update hourly; many of the subscription services have a free version that tracks on a less frequent basis.


I decided to try out two different free services to start: NovelRank, which works on a donation basis, and TitleZ, which is free while still in beta. Why these two? Because I could test drive them for free, and because they promised frequent updates. 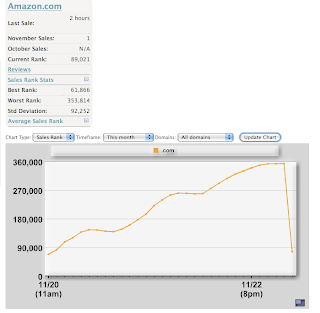 I have to say, of the two, so far I'm impressed with NovelRank. It has the most frequent updates, their data is well-formated and easy to read, and matches up well with my own tracking. To top it off, I like the site and their blog has some great ideas for authors.

At left is a screenshot from NovelRank, taken just a few minutes ago. Unfortunately, I started tracking well after my lowest (best) ranking Saturday morning, but at least we're set going forward. Guess what that dip means? 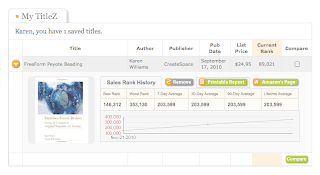 In comparison, here's a screenshot from TitleZ, taken just a few minutes later. The updates are obviously less frequent and only provide best and worst 'snapshots' (the best is inaccurate in this case) and running averages. I also couldn't find controls to change the dates shown on their graphs, either.

Neither seem to track rankings when a book hits the top 100 list in its category, which is too bad. But at least this is a start!
Posted by Karen Williams at 9:20 AM