The Passing of an Era 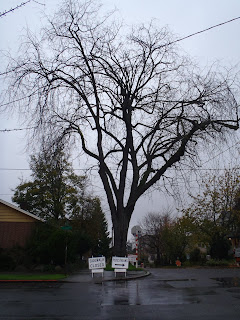 Monday, the giant elm at the corner of our rental property on Capitol Hill came down. It was a planned take down, luckily, orchestrated by Seattle Tree Preservation. Well over a century in age, with a trunk diameter estimated at 60" by the city arborist and a ninety foot canopy spread, our tree was one of the neighborhood landmarks.

The takedown was a very noisy, big toys sort of ballet involving at least six guys, dueling chain saws, a cherry picker, a crane, two shredder/chippers, a couple of pickup trucks and a more ropes than a tall ship. The level of coordination was impressive; they actually made it look almost easy. Almost. 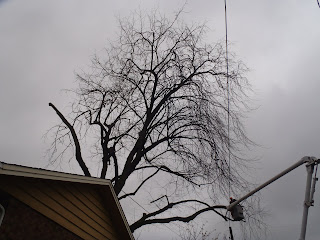 This all started back in August, with a certified letter from the city. I can say from experience, it was rather daunting, signing for that envelope, wondering what's inside. Turns out, the city arborist had condemned our tree and sent the letter giving us 30 days to have it removed. Of course, the letter arrived while we had guests, and just before we were supposed to leave on vacation. Panicking, I called Nolan, city's arborist. Turns out, just by calling him, I gave myself more time. He used the deadline to create a sense of urgency so that people would actually respond to his letters. Well it worked. 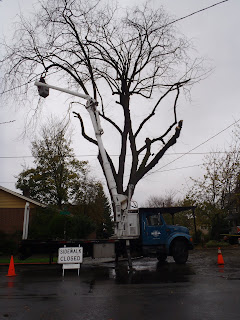 According to Nolan, the tree was beyond saving. In a very patient voice he explained that before writing his letter, he had taken a core sample and sent it to a lab which confirmed the diagnosis of Dutch Elm Disease.The tree was effectively dead, and would pose a hazard once the winter wind storms began.

But I still wasn't sure I believed him. Sure, in July I'd noticed that the tree didn't look as good as it had the previous year, that it had fewer leaves and looked a bit 'sad'. But I chalked it up to summer drought, especially as the leaves seemed to be coming back. 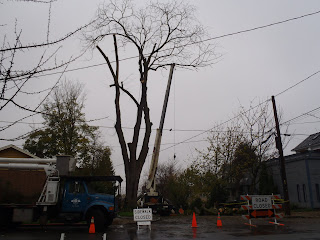 It took me a month, and visits by independent arborists to accept the verdict and collect bids. Taking down a tree that size is not cheap! Nor is it something you want to leave to the lowest bidder. I selected Seattle Tree Service based upon price, their proposed plan of action, and their willingness and interest in working with another local company to salvage as much of the wood as possible. 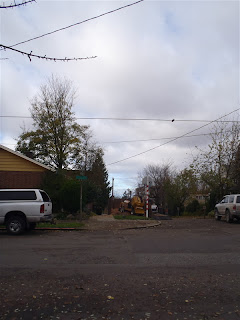 It then took another month and a half to coordinate the shindig. Once I had the permit from the city, which Nolan helpfully provided free of charge, Seattle Tree Preservation took it from there. Before they could schedule the work, Seattle City Light had to come out and trim branches away from some power lines. More delays. Then we had to submit a traffic plan as the street would need to be closed for the day. Another wait. Finally, a little over three months after the initial letter, down it came.

And that evening, safe at home, I listened to the winds blowing outside and reflected on how grateful I was that I didn't have to worry about falling limbs. But it will take a while before I get used to the new skyscape.
Posted by Karen Williams at 1:10 PM