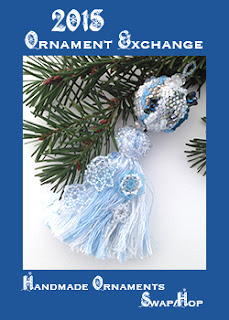 Just over a month ago, I sent out an invitation to participate in my first annual Ornament Exchange and Blog Hop.  Time has truly flown by and today is the day for the Blog Hop Reveal!

We had a small, but mighty group:

After I paired each participant with a swap partner, it was then up to them to exchange emails and handmade ornaments.  My only 'rule' for participation was that the ornaments had to be handmade by each participant and had to include at least one bead in the design.

Thank you all for joining in for this bit of holiday cheer!  Liz and Becky don't currently have blogs of their own, so they sent me photos to share in a separate post here.  From my perspective, I love how these swaps allow me to get to know other beaders and artists from around the country a little better.

I'm afraid the package that Carrie sent to me seems to have been temporarily lost in the mail.  It was coming from Hawaii, so maybe it decided to spend an extra day, or maybe a week or two hanging out at the beach before making it's way to oh-so-rainy Seattle.  Can't really say that I'd blame it!   Even still, it's been fun getting to know Carrie better as we exchanged emails regarding our holiday traditions and favorites.

While Carrie enjoys many of the more 'traditional' holiday themes, she admitted that since she's lived in Hawaii, she's "grown to be a fan of the local Christmas themes such as volcanoes, seahorses, hono (sea turtles), pineapples, monstera leaves, petroglyphs, palm trees, coral, jellyfish, starfish and reef fish".  Reading that, my original plan to send her a more traditional holiday ornament began to morph.

She also mentioned that her favorite color is the new Toho 2600F "Lemongrass", followed by "lime greens, teals, orange, orange-reds, periwinkles".  She continued "pretty much I love all the greens - especially olives and limes, oranges. Bronze/Browns/Coppers/Silver - all good."

So not necessarily the normal Christmas colors.  Can you guess where this is going?  Yep, I decided to make her an ornament in my Happy Fish series.  Because it was going to be a Christmas ornament, I decided to work with an ogee pattern for the scales.  What could be more ornament-shaped, right?

Here's what I finally came up with:

I wrapped the little fish up in a hand-painted box, then added a couple of other things to the shipping box, including some of my biscotti and a little paper ornament I made.

I haven't heard yet what Carrie thought about my unorthodox creation.  I'm truly hoping she liked it.  In the meantime, I know that I had an absolute blast stitching my newest Fish friend.

Now, be sure to check out everyone else's ornaments, and I promise to post Carrie's as soon as it arrives.