Support for the Central Stone
In the photo above, we're just a little further than we were at the end of Part One.  I'm continuing to work along the full length.  At this point, rather than running my needle through the central stone bead, I run it through an under bridge of seed beads a couple of times to give it more support.

The under bridge helps provide support and stability for my central stone bead, without completely obscuring the bottom face of the stone.

After a couple of passes through the single line of beads, I peyote stitched along two thirds of it.  This will give me easy anchors for later work.

This is also the point where I need to decide which side faces forward.  I decided that the side with more cream would be the underside.

Building a Half Bezel
Next, I focused on the side bridge (it's under my thumb in the photo above left).  Using peyote stitch I built up a bezel that cups around the edge of the stone.  This will help to hold the stone steady while leaving as much of the stone visible as possible, both from the top and bottom.  This is entirely and aesthetic choice on my part.

The half bezel itself looks pretty good, but its connection to the rest of the bracelet is awkward at best.  Something I will have to work on before the bracelet is complete.

Note that I've also started adding a new section of size 6 beads along the lower right edge and am continuing to peyote stitch around the button loop to give it a more substantial look.

Continuing to Build - One Section at a Time
From here on out I'll be working sections at a time, rather than consistently working along the full length.

Along the lower right edge, I've built up the section of size 6s.

Above, I'm using bridgework to tie the bracelet band into the half bezel.

And to the far left, I've built up the area where the button will go using basic peyote stitch and size 11 seed beads.  Since the button will cover any stitching in this section, there's nothing fancy here, though I did make a color change.  I also peyote stitch around the end to soften that edge, starting after about the fifth row.  The shape kind of reminds me of a tongue depressor  - not a terribly appealing thought. 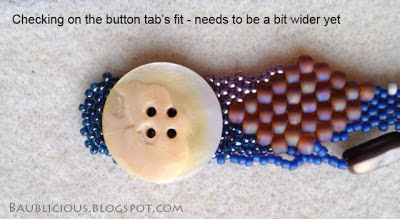 When I 'try' the button on for size and suddenly it doesn't look so bad.  In fact, it really needs to be a little wider to full support the width of the button visually.

The bracelet is about halfway done at this point.  It is still in it's Ugly Duckling stage, but is almost ready to molt into it's swan plummage.  Next steps will include continuing to build the width, working a section at a time.

I also want to focus on integrating the bracelet band into the half bezel cupping my central stone and continuing to move colors through the piece so it doesn't look splotchy.  Ideally, I'd like each color to show up in at least three different areas to give the piece a sense of repetition and balance.

Once I've reached the full width, then it will be time to look at the possiblity of over bridges, which can be used to tie color sections together and to add more textural interest.  One of the last things I will do is add the button.

Want to see it complete?  Check back on Saturday - I'll be revealing the finished piece as part of the Choose Your Own Adventure Freeform Peyote Challenge.  Not as fancy as some of the pieces you'll see on Saturday, but it's all about process.
Posted by Karen Williams at 6:35 PM