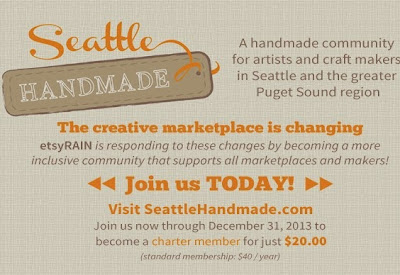 Her email was tad confusing, but I had a chance to speak with her during the EtsyRain holiday sale.  So here's the scoop as I understand it:  we will still be a support and meetup group of local Etsy sellers, but we will also be more.  Apparently Marlo received frequent contacts from crafters who didn't have an Etsy store quite yet, who didn't feel they could join in until they did.  From what she said, the change to Seattle Handmade is designed to make the group more open and inclusive to active crafters in all media, regardless of whether you have an active store on Etsy or Artfire or you sell through craft shows or you're just thinking about selling your work.

Personally, I'm really excited about this change.  I've learned so much from other crafters - lots of the ropes about what is effectively running an Internet-based business.  Not so long ago, this was all new to me and my local group were a great sounding board for questions and ideas.  If you are even considering opening an online store (whether through Etsy or some other marketplace), I HIGHLY recommend you check around to see if you have a local team.  Our members come from all over Western Washington state: Seattle, Everett, Bellevue, Renton, North, South, East… we have had members as far North as Bellingham and as far South as Olympia!  So even if you live outside of a major metropolitan area, there still might be a team in your area.

Back to Seattle Handmade, the new membership format is a paid membership, which is different from EtsyRAIN.  This makes sense to me, as every organization or club I've ever belonged to needs some sort of operating fund to handle group expenses.  My read on it is that they are also using this as a sort of barrier to entry, hoping to attract people who are truly interested rather than just the random passerby.  But that's just my take.  It will be interesting to see how this plays out - I hope that it doesn't act as too much of a barrier.

Now I just have to get better at making it to meetups!  It's soo much harder when its full dark by 4:30pm.  I think that will be one of my New Year's resolutions.