So that's my final total for my January Earring Challenge.  I thought I had made 31 pairs, but when I counted yesterday morning, I discovered that either a set had disappeared over night, or I'd miscounted.  I'd love to think that it was the former, but I'm guessing it was actually the later.

I've posted an number of the pieces to Facebook, but I'll do a recap here.  The collage above includes pretty much all of the earrings I created in the first two weeks of January.  I stuck with freeform peyote and random right angle weave for all of these.

I found myself working in series as often as not, creating a couple of pairs of earrings from the same basic design.  The flames to the lower right were the start of my largest series.   I couldn't seem to stop stitching them.  I think it had something to do with their warmth and the snow falling outside during that particular point.  A friend wondered what they'd look like if I reversed the colors, so I made one of those too, with an orange heart instead of the ultramarine blue.

In the second half of the month, I branched out, with a little tassle-making and some wire working.  I made two pairs of oak leaves - one with green stone hearts, the other with smoky crystals - as well as the more abstracted oak leaf pendant.   The heart beads came from the Seedbeaders' meeting and there's a definite valentine's flair to a number of these (valentines a la me - no pinks here!) 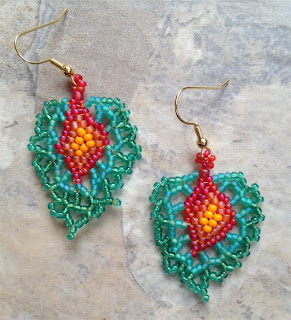 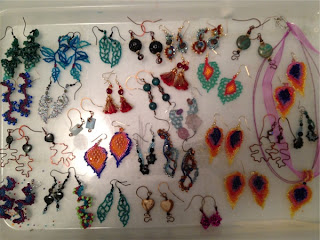 So there you have it - I think that's the lot of them!  In case it isn't, here's a photo of them sitting in their tray.

And if you'd like to see more earrings, go check out Backstory Beads, who's also participating in the challenge; her work is gorgeous!  And of course, there's the Bead Along gallery at Beading Daily.
Posted by Karen Williams at 1:12 PM