Crossing the Atlantic on the Magic


"One does not discover new lands without consenting to lose sight of the shore for a very long time." - Andre Gide


There is something magical about sailing across the ocean, completely out of sight of land and civilization.  Standing on the top deck, looking out at the horizon and all you see is ocean and the curvature of the earth along the horizon.  For years I'd dreamt of crossing the Atlantic by ship.  So much of our history as a nation was founded on such voyages; I wanted to take one of my own.  Last September, I had that chance.  It was truly magical.  So much so, I managed to plan, scheme and finagle a repeat trip.

This year's crossing was a couple of days shorter than last year's, with far fewer port days, but additional sea days - eight all told.  Sailing from Barcelona, we rounded the southern coast of Spain, sailing out through the straight of Gibraltar just as the sun was starting to set.  Heading out across the Atlantic, we stopped briefly in Funchal, Madiera, then continued on to the Bahamas, with six consecutive sea days, before fetching up in Miami, where we disembarked.


Despite the fact that Joaquin was slowly building in the Atlantic during our crossing, the weather was picture perfect. Sunrises of molten orange, neon pink and brilliant gold were followed by days of crystal blue skies with those pretty, wispy, white clouds, and ended with sunsets of golden magenta fading to soft lavender, periwinkle, then midnight blues.  Crossing the Atlantic, the daytime temperatures hovered in the high 70s to low 80s.  Interestingly, things heated up by about ten degrees as soon as we crossed into the Caribbean Sea, well before we made land.  There's no visible line of demarcation, but if felt different. 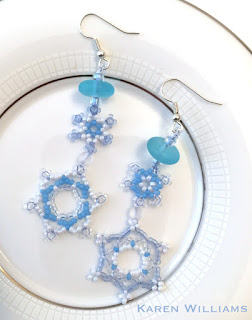 The sea days were glorious! Open-ended days where you could do as much, or as little as you wanted. Lounge by the adult pool, watch a movie while swimming in the family pool, attend behind-the-scenes talks and interviews by some of the movers and shakers inside the Disney family, learn to draw Disney characters, learn ballroom dance, watch first-run and Disney classic movies, read a book, meet new friends, laugh (a lot), work out at the gym, take a stretch class, walk around the promenade deck or play shuffleboard, even enter a shuffle board tournament.  The list of possibilities just goes on.  And on.  One of my personal favorite things to do was to spend part of each afternoon beading, sitting in the shade on the top deck while watching movies on the big outdoor screen, with cool ocean breezes drifting by.  Here's a new pair of earrings I made one afternoon for the Frozen party scheduled for that night.

Personally, I spent most of my days up on deck enjoying the sun and the breeze.  I knew it would be full-on Fall by the time we made it back home to Seattle, so I reveled in the warmth.  That said, I'm not a direct-sun sort of girl, so I appreciated all of the shady, covered areas.  It's nice being able to nap in a lounge chair without worrying about waking up beet red!

When I tired of lounging, one of my favorite organized activities was attending the behind-the-scenes lectures.  Amongst other things, each of the people interviewed shared background on their often-circuitous career paths.  While I'm pretty sure I know what I want to do when I group up at this point, I found it fascinating; the myriad paths they took to get where they were as artists, dreamers, performers and business people.   My biggest take-aways were, there is no one path to any destination, but you have to have passion and drive to get there.  Oh, and one of the lecturers mentioned that in hiring, if he had two equally qualified candidates and one smiled during the interview and the other didn't, he'd hire the one who smiled.  Because smiling is part of the whole personality-type and mindset that he was looking for.

We also caught up on our movie watching, something we don't have much time for at home.  Besides the big screen by the adult pool, the ship also had a state of the art movie theater, and some movies were also shown in the big theatre, after the evening stage productions.

The Disney Magic is a gorgeous ship, and the cruise staff is wonderful.  From our stateroom host and dining staff, to the recreation staff, to the deck hands always hard at work maintaining the ship in tip-top order, everyone was so obviously proud of what they do, and interesting to speak with.  Simply touring the ship itself is fun, and the recreation staff put together daily photo challenge quests for those so inclined towards scavenger hunts.

And every once in a while (or so it felt) we'd pull into port and have a chance to get off the ship to explore.  I love the port days, because they give me a chance to explore places I'd likely never see otherwise; if the ship I were on didn't happen to stop there.  That was definitely the case with Madiera!

Madiera is one of those islands where steep, often sheer cliffs drop almost directly down into the sea.  The city of Funchal is terraced into the side of one of these cliffs, with only a couple of blocks of flat around the port before the city begins to rise up the mountain in a series of terraces and bridges.

The shots I took from the funicular really don't do Madiera justice.  I wish I'd caught one that showed the terraced bridges that laced the city together.  Besides simply enjoying the view, we rode the venicular to reach the starting point for one of Madiera's most unique tourist attractions.  The toboggan ride back down the hill through the narrow, twisty city streets.

I really wasn't sure I was up for it;  I am NOT an adrenaline junky (there was the very real possibility that I'd be one of the few people to ride the venicular back down the hill).   But I put screwed up my courage and hopped into one of the wicker and wood sleds beside my love.  We were guided down the hill by two gentlemen who alternately rode the back of our sled and pushed us away from what seemed like imminent danger around every curve.  They laughed and laughed as I squeaked and squawked with each new turn!


Talk about scary fun.  If you ever find yourself in Madiera, I'd definitely recommend give it a try.  The toboggan ride takes you about half way down the hill; from there you can either catch a taxi ride (the cabbies are waiting right there) or walk down the narrow, steep twisting roads.  We chose the taxi and it was an adventure in and of itself, especially as we'd run out of Euros and had to take a detour to a cash machine so we could pay our driver.

And of course, Madeira is known for it's wine, so we had to do some wine tasting!  We decided on a single 'flight' of 15 year old wines.  The sercial was the biggest surprise to me; it started out almost sour, with a bit of a vinegary bite, but blossomed into surprising sweetness.


Castaway Cay, Disney's private island in the Bahamas, was our next port of call (following six consecutive sea days crossing the Atlantic).   Again, the weather couldn't have been more perfect.  The island is one of my favorite places on earth, so it's no surprise we were one of the first passengers ashore.  Ignoring the tram, we enjoyed the walking path around the lagoon to the family beach, where we were able to score two hammocks nestled together in the shade.  To good to pass up, we spent the early morning lounging, napping, staring up through the fronds of the palm trees at the brilliant blue sky and enjoying the live music wafting our way from further down the beach.

When the sun shifted enough to deprive us of our shade, we wandered down to the water, and played for a while there at the family beach before making our way over to the adults-only beach, Serenity Bay.  Since it's not protected by a breakwater, the surf was considerably higher than at the family beach.  Joe and I swam out beyond the breakers where we could enjoy the swells.  The water wasn't quite as clear as it's been on other visits, especially closer to the shore, but that was almost certainly due to Joaquin's approach (we could see the clouds building off in the distance).

Several year's ago, Disney expanded the Family beach area of Castaway Cay to accommodate the visits of their new, larger ships the Dream and Fantasy.  We visited the island a couple of years ago on the Fantasy, and were pleased that it did not feel 'crowded'.  This was our first visit on the Magic since that expansion, and it was incredible, the feeling of space!  The only time it felt crowded at all was waiting in line for lunch over at Serenity Bay - it definitely paid to get in line early there.  Walking back towards the ship, the hammocks where we started the day were open, so we ended our beach day where we started; enjoying ocean breezes and the drifting sounds of live music before heading back to the ship to pack for disembarkation the next morning.

About a half hour after we returned to the ship, we looked out our stateroom window to discover it was pouring, POURING rain as the ship prepared to leave port.  The seas remained relatively smooth for our last evening as we sailed to Miami, but Joaquin hit the Bahamas, and Castaway Cay, the next day.

Posted by Karen Williams at 6:56 AM