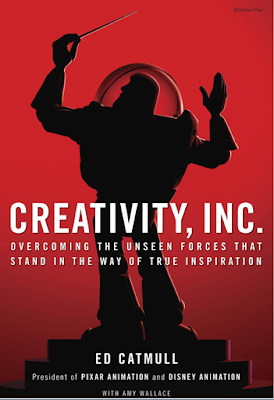 I've been doing a bit more reading lately, and have been working my way through Creativity Inc. by Ed Catmul, president of Pixar Animation and Disney Animation.   My husband picked up the book before Christmas, and it's been floating around the house ever since.  While the book focuses on the lessons Catmul (and Pixar) have learned about fostering creativity in a large, corporate environment, I found many parallels to my personal experiences as a solo artist.  His candid look into Pixar's creative process is both refreshing and thought-provoking.  I found myself alternating between "YES! Exactly" and "Huh! I hadn't thought of that" as I read.  My copy looks like a ticker-tape parade with all its little post-it flags pointing to passages that struck me.

Through the book, Catmul reminds the reader that creativity is a process, and there WILL be lumps and bumps along the way.  Creation is a messy process, and most projects start out ugly. He stresses that understanding this, and protecting the 'ugly baby' is important to allow for it to potentially grow into something beautiful.   He also reminds us that starting on a project is a journey into the unknown.   That at the beginning "There is no movie.  We are making decisions, one by one, to create it".  Sound familiar?  The parallels to any creative endeavor are unmistakable.

In his introduction, Catmul states "The making of Toy Story - the first feature film to be animated entirely on a computer - had required every ounce of our tenacity, artistry, technical wizardry, and endurance.  The hundred or so men and women who produced it had weathered countless ups and downs as well as the ever-present, hair-raising knowledge that or survival depended on this 80-minute experiment.  For five straight years we'd fought to do Toy Story our way."

As solo artists, our art can make the same demands - drawing on our tenacity, endurance and technical skills, as well as our creativity - without the support network of a larger creative environment.  We have complete creative control, but often have little in the way of back-up or support.  The book reminded me of the importance of establishing a personal a creative support network.

Creativity Inc. stresses that an atmosphere of fear is anathema to a truly creative environment.  Mistakes will happen.  Some big, some little.  Fear of the repercussions from those mistakes cripples the creative flow.  Accountability is important.  But so is an understanding that mistakes happen, and a willingness to think outside the box not only in creation, but in response to the unexpected of the less pleasant sort.

A safe environment is crucial to developing one's vision, as is constructive criticism. Constructive being the key word hear.  Catmul devotes an entire chapter to "Honesty and Candor", focusing on Pixar's Braintrust, which meets several times a year to assess each movie they're making.  Introducing this chapter, Catmul states "People who take on complicated creative projects become lost at some point in the process. It is the nature of things - in order to create, you must internalize and almost become the project for a while, and that near-fusing with the project is an essential part of its emergence.  But it is also confusing."

His anecdotes from Braintrust meetings provide beautiful examples of the power of constructive criticism.   Criticism can be difficult for me, no matter which 'side of the table' I happen to be on.  It's difficult for most of us, I think.  Reading through their process gave me powerful insight and examples of how truly constructive criticism can be given and received, and how it can work to improve a project.  Lot's of food for thought.

Other powerful concepts he explores through the lens of his time with Pixar and later Disney Animation include The Hidden, looking at the creative process of going from the unknown to the known; The Power of Limits, how boundaries help us to create; and Post Mortems, looking at what we've done to see what worked, what didn't and what could be done better, then using that information to add to personal and corporate knowledge.  This last resonated with me as what I've been trying to do with my Lessons Learned blog series.  The series looks back at the past year, solidifying what I've learned in a series of essays, then sharing that knowledge with my Internet 'braintrust'.

I could go on; did I mention how heavily I bookmarked my copy?  But I'll end this here:  Creativity Inc would be a great commuter book - it can be easily picked up and put down, while providing a veritable feast for anyone interested in thinking about how they relate to their creative process, no matter the setting.