Out with the Old Year, in with the New 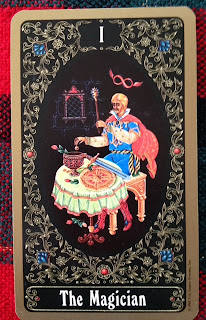 Every year on the Solstice, I draw a tarot card from the major arcana to act as a meditation focus for the coming year.  No surprise, I then use the couple of weeks between the Solstice and New Year as a time of reflection, looking back, looking forwards.  What went well, what didn't.

Last year's draw was the Magician.  He was a really fun one to work with - the alchemical/magical process of manifesting thoughts and dreams into reality.  The card became sort of my 'patron of the arts', encouraging me to go for it.  It's funny how little it can sometimes take to go from 'no way' to 'maybe I can'.

A lot has happened this last year.  I published my second book, Corsets, Caps and Stays: Elegant Beaded Beads with Right Angle Weave, taught two classes at Bead Fest Texas, participated in a number of great blog challenges and two Bead Soup parties, added a number of kits and patterns to my Etsy Store and continued to write and meet new people here on my blog and on my Facebook page.

Also had a few set backs, including the news last month that none of my classes were accepted for Bead Fest 2013.  Not even my Fancy Fish.  That definitely hurt!  And due to some health issues, I missed a couple of proposal deadlines this fall.

Going into 2013, I have a number of UFOs; isn't that always the case?  Two in particular I plan/hope to finish in the next couple of months.  One is the collar I started using Kristi Bowman's copper focal for the clasp.  Below's a collage of my bead work in process and her lovely focal. 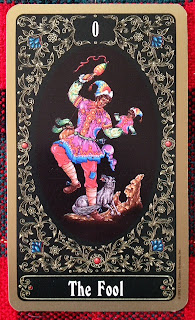 What's my card for this year?  I drew The Fool - the first card in the major arcana.  My deck shows a scomorokh, a wandering clown of medieval Russia, walking blithely along the edge of the cliff, with a wolf/dog twining around his legs.  Common interpretations for the card include "innocence, new beginnings, blind faith, simplicity, folly and extravagance".  My hope is to tap into the 'beginners' mind set' without actually falling off any cliffs, literally or figuratively.  Wish me luck!

I'm definitely looking at doing a few things differently.  Here on my blog, I hope to feature the works of other artists who are also working with freeform peyote. My goal starting out is to showcase two artists per month.  We'll see how that goes.

I enjoyed my weekly series on the Elements of Design, but had a hard time keeping up with it on that regular a basis.  Expect to see periodic additional entries into that series.  I'd like to make it a regular feature, but am trying to figure out the frequency which will give me enough time to give each entry my best effort (I am not a fast blogger and they take a fair bit of work).

I'm also thinking of a couple of different possibilities for online teaching - I'll be writing about that more in the next couple of weeks and hope to ask your opinions.  So there are some of my thoughts on the new year.  Now how about you?  What do you hope for 2013?

Oh, and in case you're wondering, my deck is an older version of the Russian Tarot of St. Petersburg.  It was a gift shortly after I returned from Russia and remains one of my treasures because all of the images are in the style of medieval Russian folk art.  They remind me of the designs on their beautiful lacquer boxes.  I mostly just look through and admire the pictures.

Posted by Karen Williams at 3:39 PM