One Down, Three to Go - Last Year's UFOs

No matter how hard I try, I never manage to finish all of my projects before the end of the year. Last year was actually better than most, but here in January I am still left with four projects that were begun in 2010, all of them projects that I actively want to complete.

The problem?  I've started several new projects as well.  And it's so hard to go back to old projects when new one's are clammering for attention.  So I'm hoping this post will help me refocus on these, my neglected children. 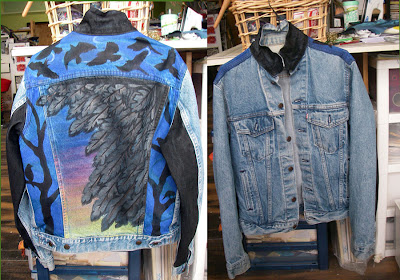 The first is my Crow Jacket.  Surface design with oil sticks and hand-cut stencils on a ready-made jean jacket.  Based on the photo evidence and my notes, it appears I began actively working on this in June, and shelved it for other projects in July.  The jacket's back is pretty much finished.  The front, uh, not so much. 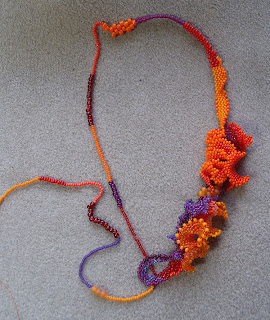 Next up: a necklace to coordinate with my Spanish Dancer bracelet, also begun in June while I was waiting for my first proof to come back from the printers.  I set it aside when I decided I to make additional samples for the book.  Finishing this in time to include would have delayed the entire book a lot (obviously, since it's not done yet.)

I'm half tempted to cut line and turn it into another bracelet.

Exhibit Three:  a choker to match my Leopard Jasper bracelet.  It is actually pretty close to completion.  My goal is to wrap it up in January. 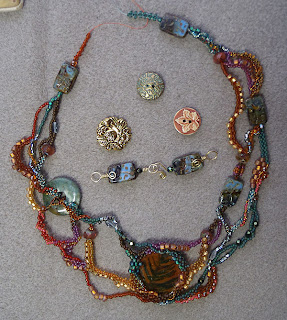 The last UFO from 2010 I finished earlier this week, but don't actually have a picture of the final results.  My December challenge necklace lacked a closure and a name as it entered the new year.  It now has new name, Hunting Fae (since it was inspired by the fairy paintings of John Anster Fitzgerald), and a brass, wireworked closure.

In the photo, I'm still trying to decide which closure I want to use.  I went with the wirework set instead of the button.

So what UFO projects do you still hope to complete?
Posted by Karen Williams at 6:57 PM