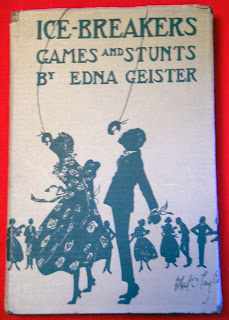 I just found this little gem of a book in a box of photo albums from Joe's grandmother.  Originally published in 1918, our copy's a seventh edition, published in 1920.   Ice-Breakers:  Games and Stunts by Edna Geister appears to have been quite popular in its day.

The forward is so sincere as to appear almost trite today, giving the party planner an almost holy mission:  "To draw from the myriad homes of every State in the Union millions of young men and women, enlisting in the service of Uncle Sam, and to surround them with wholesome environment, socially and otherwise, is one of the prodigious tasks now being assumed by our nation .....Wanted:  the most advantageous methods of mixing the sexes in social amusements giving relaxation and rightful pleasure. "

Wow!  That's quite the mission statement.   To have the country so focused around a common cause; it's hard to imagine.  And to believe that your little book of party games is actively helping fight the good fight.  What would it be like to have that sort of clarity of belief?

Flipping through the pages it's full of little skits, party games and 'tricks', which are usually memory or observation games.   I wonder how often these games, or others like them, were actually used for parties back then?  If so, their guests definitely put more work into the party than we do today.   How about participating in shadow pictures; acting out poems in pantomime as the words are read aloud? 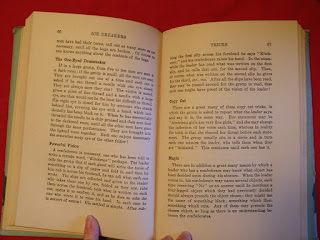 Many of the games have little tricks - like the game "Slang", where all the party goers write down a list of the slang words they know.  The hostess then reads all the lists.  The prize is given to the person with the shortest list.


And I now have a 126 page book full of ideas.  I've always wanted to give a roaring 20s party.  Maybe I'll incorporate a few ideas from my new friend.  Shadow pictures anyone?
Posted by Karen Williams at 9:28 AM