Or at least my book, FreeForm Peyote Beading, is!

It went live with Createspace.com last week, official publication date September 17, 2010. But I've been waiting to actually see it on Amazon - checking each morning to see if it was there yet.

And this morning, it was!

Lot's to do yet. Still updating my website. Need to figure out how to add the look-inside on Amazon. Just finalized the date for my release party - Saturday, October 23. (Takes me far longer to get copies of my book than someone on Amazon). I have postcards printing at Kinko's. Once the website is fully updated, need to start talking to bead stores, and sending out letters to magazines and such. But for now, I'm walking on air - my book is live on Amazon!
Posted by Karen Williams at 8:07 AM No comments:

Email ThisBlogThis!Share to TwitterShare to FacebookShare to Pinterest
Labels: self-publishing 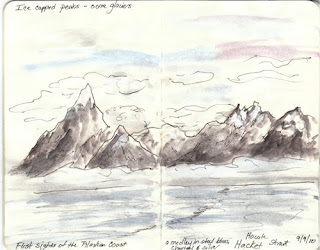 I'm not sure I'd recommend the particular Moleskine I brought along for this trip. The blank, cream-colored pages warped terribly with the slightest addition of water. Watercolors and markers both bled through to the other side such that I had to skip pages between spreads.

But on the other hand, the book, at 3.5" x 5.5", was wonderfully pocket-sized and quite slim, which made it easy to pack, and easy to use.

I don't guarantee the spelling of any of the place names on these pages. They're mostly gleaned from navigational announcements by the ship's onboard naturalist. 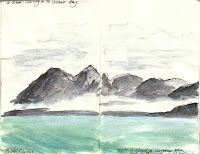 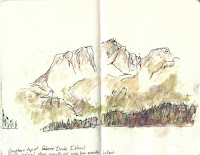 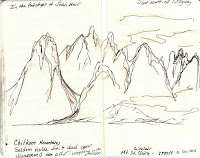 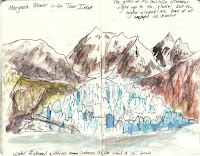 Each thumbnail is linked to a larger, almost full-sized copy of the original image.

The line drawing is of the Chilkoot mountains, outside of Skagway - they reminded me of something out of a classic Chinese painting, with their ragged cliffs rising out of the mists.

The other three are from Glacier Bay. Everything about Glacier Bay fascinated me - the murky blue-green water filled with glacial runoff, the forests which grew younger and younger the further back into Glacier Bay we went, as we followed the retreat of the glaciers, and of course the mountains and the glaciers themselves.
Posted by Karen Williams at 6:48 PM No comments:

Where'd You Get the Book? 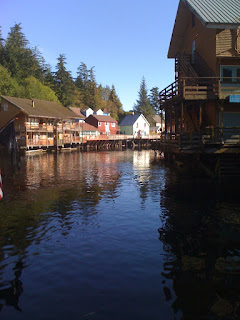 "Where'd you get the book?"

I'd sat down on a bench in Ketchikan next to one of the locals in order to add a little color to one of my sketches. We'd exchanged some pleasantries - he'd moved to Ketchikan three years before and loved it; I was there for a day, temporarily disgorged from one of the five huge cruise ships in port.

His question about my sketchbook startled me; was he interested in drawing, did he not know where to buy his own? So I showed him the cover - just a moleskin, one of the slim ones that come three to a pack. But he insisted, "No, where did you get the book?"

It took another couple of rounds of question and inadequate answers before I understood his meaning - he thought I'd bought a coloring book of sorts - a book of line sketches that I was proceeding to paint with my little watercolor box! Startled at the realization, I made some sort of fumbling reply - blank book, line sketches, watercolors, see here's my pen. But underneath, I couldn't help giggling with glee. Someone thought I'd bought my sketches! 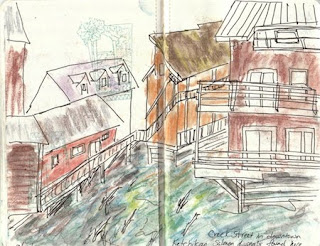 I only really sketch on vacation, and rarely landscapes or cityscapes, since I'm more of a detail person. But this time around, my sketches were filled with cloud capped moutains ranging down to the sea, with a few oddball sketches, like the very rough one I was working on of Creek Street, thrown in. His belief that my sketches were worthy of publishing, even as a coloring book, made me smile, and the smile just wouldn't fade.

And yes, there were both salmon and seals in Creek Street, though only the salmon made it into my sketch (and you can't see either in the photo taken with my iphone).
Posted by Karen Williams at 3:37 PM 1 comment: