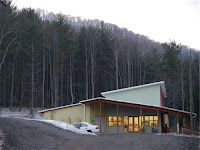 Monday evening, the wood studio hosted an open house, with a free-form project. Located at the uphill end of a short road, the wood studio is backed by the woods from which the current class is harvesting their materials.

When you arrived you were directed to a large pile of twigs and smaller branches and told to choose whatever appealed to you. I found a thin, forked branch with wonderful, knobby curves. Chris then handed me something that looked suspiciously like a garlic grater and a triangular scraper tool and told me to remove all the bark from my chosen branch. The bark was rather pretty, so it was a little hard to start. But as the clean, pale branch skeleton began to emerge from its skin, I decided I didn't miss the bark all that much. 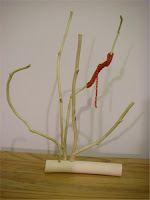 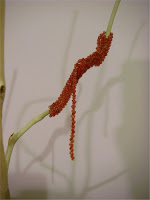 I ended up clipping my branch into three pieces. Then I wasn't sure what to do with them. I ended up making what I called my "thicket". But I headed back to the bead studio, and sure enough a beaded tube I'd made earlier in the day as a sample for seaweed fit perfectly over one of the branches. So I think it may well become an armature for a seascape. Except I want to leave some of the bare branches visible, like bleached coral.

I don't really like the base, its rather tippy, and log-like, so I'm thinking about alternatives, including working with Alyssa down in clay to make something. In the meantime, it works well enough.
Posted by Karen Williams at 6:28 AM