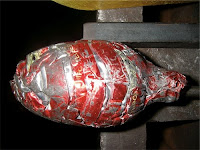 This morning at breakfast there was a cryptic message on the board "8pm, Extreme Easter Eggs demo - wear safety glasses" or some such. I noticed it and continued on with my day. Later, I heard something about Easter Eggs out of beer cans in the metal studio. Hmm.

So a bit before 8pm I tromped up to the iron studio to check out the demo. The first half of the demo indeed involved beer/soda cans. They had used a 12 ton press to crush beer cans (Dan and Sam would love it is all I could think), then drilled through the cans and threaded them onto a metal rod, and welded washers in place on either side to hold them firmly in place so they couldn't spin or wiggle on the rod. One egg apparently takes 6-7 cans. At this point, the crushed cans formed a round disk about an inch and a half tall, and the rough width of a soda can. They then used a power hammer and an egg-shaped insert die to shape the cans. This is apparently called die punching, and could be done cold because aluminum is a very soft metal. He kept turning the aluminum on the rod as the hammer pounded, in order to complete the egg shape. Tomorrow they'll trim the eggs from the rods, and they'll be ready for the Easter Egg Hunt on Sunday.

But the coolest demo was yet to come - die forging. With die forging, you're heating metal up to forge welding temperature. The metal is heated to a bright yellow, just before it starts to burn and then they rush it over to the power hammer before it can cool too much. They used a little more force with the power hammer, but otherwise it was very similar to the aluminum cans. The metal is so hot, it was actually hard to photograph it because it was almost too bright and caused the surroundings to be underexposed. 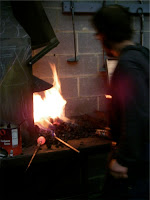 They'd spent some time this afternoon prepping samples for the die forging. An interesting sample was composed of 22 pieces of quarter inch stock welded to a half inch core to form a cylinder about 3 inches long. The biggest challenge with this piece was getting it to heat evenly, so they turned it and turned it in the forge, and it seemed to take much longer to heat than the solid piece he had demonstrated with just prior. But when they rushed the heated metal to the power hammer, it took maybe a half dozen strokes before it was an egg shaped object. I took video of two of the forge weldings. The first, with a solid piece of metal, took about a minute and a half to reach egg state. With the quarter rod sample, I took 16 seconds of video and it was complete. 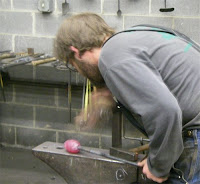 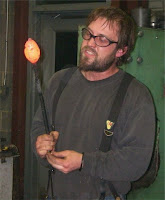 I wished that Joe, and Dan, and even Tristram could have seen the demo; it was way cool. I remember Joe complaining about trying to learn forge welding from a book because it was so difficult to correlate the colors described in a book to the colors actually seen as the metal heats in the forge. I can say that I saw the bright yellow as they drew it from the forge. By the time the forge welding was complete, it had faded to orange. And a little later, it glowed cherry red.
Posted by Karen Williams at 7:20 PM