Despite questionable weather, the Iron Pour happened almost as scheduled this morning and was an absolute blast to watch. LeAnn moved it a bit earlier, to slide it in between rainstorms. 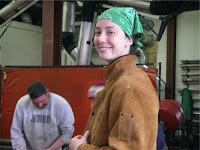 The class had spent the last week or two making molds, and breaking of 1400 pounds of cast iron radiators that they picked up at the scrap yard in preparation for the pour. Andrea, one of my roommates, is in the class so its felt like I've seen a little more of the prep work than I might have otherwise.

I love that orange glow! I took lots of video, and uploaded three - my first experiments with uploading video to the web. This first video shows the sequence of one pour. They tapped the furnace repeatedly over the space of about 2 hours. The bucket (I think they called it a fiber ladle) could hold 120 lbs of metal at a time. Before pouring the metal into the molds, they added a flux to the bucket to pull out impurities.
Posted by Karen Williams at 5:35 PM