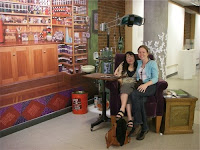 Friday we drove down to Nashville to see an exhibit David had at the University School, where he's an Artist in Residence, and to meet his other class. The exhibit opened with a full-size photograph of David's Seattle studio, along with his purple chair & beading lamp. So of course we had to all try it out for size. So much for the serious artist demeanor! :) Here are Kae and Kristin sharing a seat.

Before leaving, David had suggested that we do a ring workshop for his other students. I think we were all envisioning something like the workshop we'd done for Penland staff several weeks ago. As soon as we met his students, I wondered why we were teaching them. The work they've done is fabulous. Turns out they've been meeting with David for 3 day sessions once a month since either late January or early February (no one could quite remember when they started). This was either their last or second to last session with David (again a little confusion), but the work they'd developed made me feel a bit like a pretender. One of the women was doing right-angle-weave sculptures with hand-blown eggs. Lots were working with random right angle weave. 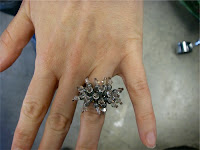 But, rather surprisingly, a number of them really enjoyed the ring workshop. Apparently all they'd done were the big projects, and it was thrilling to be able to complete something in the space of a couple hours for a change. Paula, one of the Nashville students, made this ring: the fringes were made using swarovski crystals. David had suggested that they sew the band before class - her boyfriend asked her if she was working on her engagement ring.

We saw almost nothing of Nashville other than a slice of the Vanderbilt campus, a really awful Days Inn, and the highway because Saturday was Polyester Prom back at Penland. But you'll have to wait until tomorrow to learn about Poly Prom, 'cause its now almost midnight and breakfast is at 8:00am. Can't miss breakfast!