Last Thursday I had the privilege of witnessing the wonder that can happen when a community rallies behind a cause.  With less than twenty four hours to go, the messages fairly flew across Facebook, spilling over into Twitter and Google+, with everyone urging their friends to support my book and Kickstarter project before it was too late.

I felt like I was at command central for some major launch facility, trying frantically to keep up with the traffic and respond to emails and queries real-time.  Nothing could have prepared me for the amazing, wonderful craziness that was Thursday. 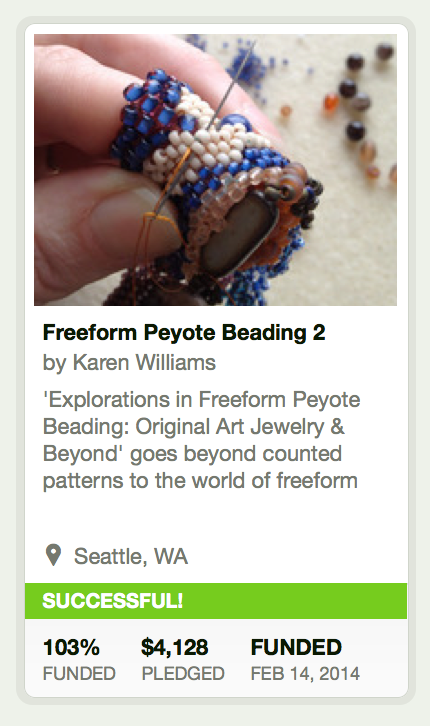 By the time the dust settled and the campaign closed Friday morning, the number of backers had nearly doubled and the Kickstarter had SUCCESSFULLY FUNDED! (According to Kickstarter's stats, only 43.5% of campaigns are successful -  we are among that happy minority!)  We are now full steam ahead for production of Explorations in Freeform Peyote Beading.

Thank you to everyone who joined in the first days of my campaign.  There wouldn't have been a campaign without your strong, steady support.

Thank you to everyone who helped to spread the word.  Many of you were absolute rock stars with this!  Thursday, I learned the true power of such advocacy.

And thank you everyone who threw in your weight on the last day to make this happen.

Here's the roll call of the amazing community behind this project:

I copied this list directly from everyone's Kickstarter profiles.  I'll be checking with each of you before I add your names to my website and to the book to make sure it appears as you'd like.

About half of the backers listed their hometown in their Kickstarter profile, so I plugged those into a map, courtesy of Zeemaps.com.  If you didn't include a hometown in your profile, I didn't add a pin, even when I personally knew the address.  But I do know there are international backers from at least two additional countries.

What an incredible tool the Internet can be for connecting communities of like-minded people from around the world!  If you're a backer and don't see a pin for your hometown - let me know and I'll be happy to add it.

And thank you all, my blog readers, for bearing with me over the past month.  Expect at least one more Kickstarter post - this one about lessons learned.
Posted by Karen Williams at 7:28 AM