The Lost Week and my Bead Fest Trip Report

What ever happened to those colds where you wake up one morning with a sore throat and a fever, spend the day lounging and sleeping in bed and wake up the next morning feeling right as rain? Of if it was a particularly bad cold, it might last two days? I want one of those the next time (hopefully two or three years from now) that I get sick!

It's now been a little over a week and I'm finally starting to feel like I might be ready to rejoin the human race. Whatever I caught, this chest cold really knocked me on my pins. I hate, hate, hate cough syrup (did I mention I hate cough syrup?), yet I found myself taking it ever three hours like clockwork to keep my cough under control. Without it, I coughed until my vision would start to go black.  And it was hard enough to breathe when I wasn't coughing

I did consider that I maybe ought to go to the doctors, but that would have entailed either walking or taking a bus, both of which were beyond my abilities. And even if I did drive, the fear of having a coughing jag while behind the wheel would have kept me at home.

In truth, I started to feel a bit better over the weekend. Just in time to help my husband move everything in our basement to get ready for the earthquake retrofitting which started yesterday. We live in Seattle in a 98 year old house that has never been properly pinned to its foundations.  Thought it was about time to fix that, and when I scheduled it back in August, it seemed like a full week to sort through the basement after Bead Fest would be more than enough time. Oh well....

To prepare, we had to move Everything away from the Entire perimeter of the basement. Made more difficult by the fact that A) it's a very small house, so there's not a lot of 'center' to be had and B) we've lived here twelve years. And then, of course there's the fact that neither Joe nor I could lift anything without running for the inhaler or cough bottle. Needless to say, it was an interesting weekend, and I got very little else accomplished beyond playing basement sherpa. Which is all to explain why it's taken me so long to write about what I really wanted to talk about - Bead Fest Texas!


First I have to shout out a thanks to my friends who came over Tuesday night to help me with last minute kit preparation.  Despite weeks of advance prep, I was down to the wire.  My printer had been running non stop since the previous Friday (it's a little slow).  They packaged the last batch of needles, cut kit covers, folded instructions and helped me put all the various pieces into the appropriate kits.  Yeah!


Then I had Wednesday to fit it all into two suitcases, with kits definitely taking precedence over clothes.  Since the kit making had gone until the last minute, I really didn't know what it all would look like 'on display' until Thursday night when I set it up in my hotel room, just to see.


Friday morning I packed it all back up and dragged my larger suitcase over to the Expo Center for the Meet the Teachers session.  Here's a picture that I got one of the people visiting table to snap.  Believe it or not, people were actually there, but they parted like the Red Sea as soon as the camera came out.  Luckily, they came back just as soon as the picture was taken.  In the left corner of the picture you can see Joan Babcock.  She and her husband Jeff were both incredibly nice.   Jeff, especially was very willing to share tips and advice and he highly encouraged me to apply to teach at Bead and Button.  That is my dream for 2014 - we'll see.  Oh, and it turns out they also use CreateSpace to print their books.

Also got to meet several of the other teachers, including Rolanda Patterson, who taught the Steampunk Cogs class. Wish I'd gotten a picture of her standing up - I had to borrow this one off of Facebook so you could see a glimpse of her awesome costume.  Since she was teaching a steampunk inspired class, she came dressed for the part in a perfect Victorianesque ensemble that she'd made herself.


And Rolanda introduced me to Mandi Ainsworth, another incredible bead artist and instructor as well as the editor of the Bead Circle Network.  Amongst other things, her blog has a series of podcast interviews, including Marcia DeCoster and Jean Campbell.

Technically, the meet and greet was only supposed to run for an hour and a half, but somehow over four hours had passed by the time I made it back to my hotel room just across the way from the Expo Center.  Then it was time to prep and repack for my first class.

I didn't make it to check out the shopping until the next day.  My goals were to look for things that I couldn't easily find in Seattle.

First thing that caught my eye was Elizabeth's storage solutions.  Lots of little clear boxes all housed in easily portable trays with nicely locking lids.  Better yet, she was handing out samples of the little containers.  The lids seem very secure, but are easy to open - both huge wins.  The little indentations in the lids are to make it easy to pull them out of a full tray.

If I hadn't been traveling by plane, I would have picked up at least one tray.  But I was worried about fitting everything in on the return trip (my suitcase was right at the weight limit on the way out).  And it turns her storage trays are available through Fire Mountain Gems.  These are definitely going on my Christmas list!

I'd purchased a really cool art bead from fellow instructor Katie Holland the previous day.  It's felted wool with her textured metal bead caps and a copper tube rivet.

Also picked up some fun silver bird charms made by Cathy Collison of Trinket Foundry.  They're cut from antique silver-plated tea trays.  I love how the designs from the tray turn into feathers and body contours for the birds.


Cathy is such a fun person and I love her work!  She makes these cool cut and tumbled glass rings which drew me into her booth with covetous glee.

And then her stories made me want them even more!  I left her booth with a number of her rings and lots of stories.  The large greyed-green ring is from the bottom of a wine bottle.  It's convex on one side, and completely concave on the other.  The wide sky blue ring is from an antique electrical insulator - the type my grandmother used to collect.  And the gold ring she said she'd dusted with something she called 'fairie powder' before annealing it to give it a lovely oilslick finish up close.

But my favorites, story wise are the red to orange rings.  Turns out she cut them from red glass votive candle holders.  Did you know that the longer red glass is exposed to heat, the darker it becomes?  Cathy says that's why red glass candle holders often seem to get lighter as you go towards the top.  I have an incredible soft spot for red glass as I inherited a collection of it from that same grandmother who collected electrical insulators.  We had a lot in common.  So I purchased a set of graduated rings and at some point I will make a piece specially for Lela. 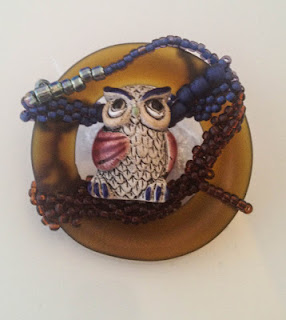 Oh, and I used one of Cathy's rings to make my Owl Brooch from my previous post.

My classes themselves were tiny.  Definitely need to keep working on getting my name out there.  But my students seemed to enjoy and I know I had a great time getting to know them and sharing the techniques.  One of my student regularly attends Bead and Button and takes numerous classes there each time.  So I asked her what she thought of my kits and handouts and she said they compared favorably to anything she'd received there.  She loved the detailed photographs and illustrations. So that made me very, very happy!

And I got a chance to meet and chat with Melinda Barta, the editor Beadwork magazine.  She is incredibly nice and personable.  We chatted a bit about copyright and I want to follow up with her on that.  I've had some concerns about having my designs published in a magazine and losing the copyright so that I could no longer teach or make kits for those designs without violating the copyright agreement.  Looks like that might not be an issue.  I need to follow up with her via email - another thing I haven't done due to illness.

But there you have it, my trip report for Bead Fest Texas.   Any of you who have borne with me to this point definitely deserves a medal!

Posted by Karen Williams at 7:00 AM