50,028 Words and the Night of Writing Dangerously 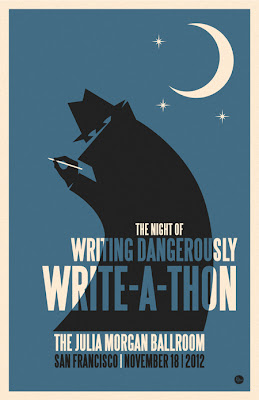 Back in early September, I made all sorts of grandiose plans for November.  Here in November, I've been scrambling to keep up.

One of those plans I made involved Nanowrimo.  As you may know, November is National Novel Writing Month, and the folks over at Nanowrimo challenge each and every one of you to write a novel over the 30 days of November.

I find myself looking forward to Nanowrimo eleven months out of the year.  Nanowrimo.org is hands-down the best support network for aspiring writers I have ever found.  For thirty days, they provide every encouragement to simply write.  Pen to paper, fingers to keyboard, internal editor silenced – with duct tape if necessary – letting the words flow.

This is my fourth year participating.  While the goal for Nanorwrimo is 50,000 words in 30 days, this year I decided to up my personal ante.  My goal was and is to actually FINISH my story this time around.  I will not feel I have won if my characters don’t make it to their own finish line, whatever form that might take.  And so I decided to take drastic measures.

That's where the Night of Writing Dangerously comes into my story.  The wonderful folks who sponsor Nanowrimo host a gala fundraiser event in San Francisco every year during November.  That's what I want to do, I thought to myself.  If I could reach 50,000 words before I left that ballroom, not only would I get to ring the winners’ bell to the acclaim of my peers, but I'd also give my characters twelve additional days to make their way through whatever my story has thrown at them before we’re all dumped into the cold, cruel, Nanowrimo-less world of December.

So I put together my fundraising page and contacted some of my nearest and dearest and raised enough to attend and to drag my amazing husband along with me.  And I bought our plane tickets.


Fast forward to November 10.  It's just over one week until the Night of Writing Dangerously, and I'd managed to write exactly 8,709 words.  That meant I was 7,907 words behind the recommended pace to finish by November 30th, forget about November 18th.  Ouch!  I wasn't sure I could catch up by then, let alone by by November 18th.  I nearly threw in the towel.

But my mom, mother-in-law, sister, aunt and best friends had all pledged.  I didn't want to go back to them and say, well I tried, but I gave up.  Even if they'd understand.  I wanted to at least put in a good showing.  More, I wanted to have something awesome to share.  So I decided to give it my all.

So I wrote, and I wrote, cramming writing into every little bit of time I could squeeze from my schedule.  By the time I arrived in San Fransisco around midnight Friday night/Saturday morning, my word count stood at 25,659.  I had written just shy of 4,000 words that day; one of my best ever single-day counts in four years of participation.  I was still behind, but I figured I could at least catch up with the recommended daily word count before the end of the weekend.  And I hadn't given up!

Then something miraculous began to happen.  In between short jaunts out to see snippets of the city, I continued writing and my story came alive!  By Saturday evening, I'd increased my word count to 34,096.  I wrote another 2,000 words before joining other Nanowrimos for breakfast at a local diner on Sunday.  By the time we had to dress for the event, my word count stood at 42,015.

But I still had nearly 8,000 words to go, and only five hours during which to write if I wanted to "win" that night.

The way the night works is from 4-5pm there's cocktail hour, with an open bar.  Joe and I showed up late, because more than one drink and my literary hopes would have certainly been dashed for the night.  At 5pm, doors to the ballroom itself opened and everyone scurried in to find their seats.

It was the funniest thing to see, everyone in their Noir themed gala finery, sitting down and whipping out their laptops.  Everyone else at our table were from the local area and knew eachother, and none of them were trying to go for the bell.  But they were very encouraging when they found out I was, and how far I still had to go.  I'd barely sat down before the bell rang for the first time and everyone burst into applause. It was Chris, one of the writers I'd met at breakfast that morning.  He'd been at 47,000+ words at that time.

There were speeches and word sprints (where you try to write as fast as you can for a specific period of time) and raffle drawings and all sorts of other fun and interesting things and I can't tell you about any of them; I was trying to focus so hard on writing.  I did help myself to the candy bar, and spent the evening hopped up on cinnamon jelly beans, which seemed to work even better than chocolate to my amazement.  At some point, Joe went out to the buffet and brought back dinner for me.  Later in the evening he delivered a German chocolate cupcake, and at 10pm, a freshly baked chocolate chip cookie and milk.  And still I wrote (do you see a theme here?) 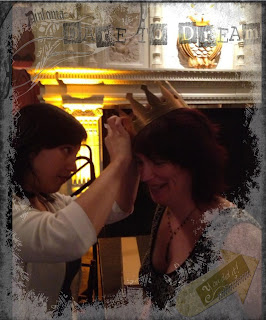 At 10:32pm, less than half an hour left before the evening ended, I checked my word count once again. There were the numbers I'd been hoping for: 50,028.  For a moment I simply stared at the screen.  Then I started to vibrate.  Then Joe asked me what was wrong.  I couldn't speak, so I pointed, not quite believing what it said.  He looked at my screen, grabbed my hand and literally dragged me to the front of the room.  There, a very kind woman put together my crown. Where else do fully grown adults wander around proudly wearing paper crowns?  Then I got to ring the bell.  It was large, and my hands were so numb from all the typing I had to hold it with both hands.  And the room applauded. 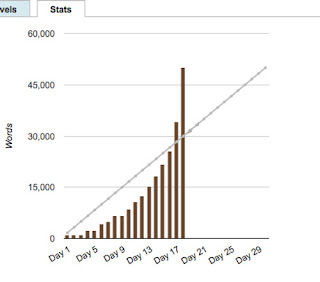 Some of my writing from last night is truthfully quite awful, I am sure.  I haven't even opened my document to look at it since Sunday.  Tomorrow morning, I think, is soon enough.  To reach my word count, I'd turned the automatic spell check off, so I wouldn't be distracted by the red corrections.  I expect my entire screen to bleed red when I turn spell check back on.

But the amazing thing is, I truly like my story!  It's ungainly, and awkward and needs a huge amount of revision, but I'm more than two thirds of the way through the plot and it's fun!  I have never made it so far into the plot in any of my other previous novels.  And now I have another twelve days (ten now as I took the past two days off) to finish the first, horribly rough draft of Jane's, my 13 year old protagonist's, story.

I'm still stunned that I actually did it!  On Sunday I wrote 15,932 words.  To give you something to compare it to that's roughly equivalent to about 59 pages in a trade paperback.  Even today I'm still stunned and walking on air every time I think about it.  I did something I truly thought couldn't be done.  I thought I'd lost my opportunity when my word count slipped so low last week.

If you're curious about my story, you can check out the plot synopsis I wrote on November 1st on my Nanowrimo page.  The story has definitely morphed since then, but that's where it started.

Posted by Karen Williams at 7:40 PM