At different points in my life, I managed some fluency in both Spanish and Russian as well as maintaining some reasonable command of my native English.   Learning new languages always drives home two points for me:

1) Use it or loose it - if you stop practising a language, it becomes more and more difficult to use it with any fluency.

2) Our language frames and shapes our thoughts, and different languages make it easier to think about different things.

Which leads me to my theory - that if you have significant trouble working with color, it's likely because you've either never learned the particular vocabulary that would best allow you to analyze and interpret what you see, or that you simply haven't allowed yourself enough time to practice.  And that's really what this whole series is about; developing a working vocabulary.

Our vocabulary words for last week were Value and Contrast.  This week it's Hue and Intensity.

Hue refers to the specific name of a color.  For instance, the color red comes in many different hues.  A few common names include crimson, fire engine red, magenta, rose, brick red - I'm sure you can think of several more.  Each differs slightly from the other in one or more ways.


Intensity allows us to look at the relative clarity of a particular Hue in reference to its base primary color.  Primary colors are fully intense examples of their basic hues.  So, primary red is fully intense.

In the print industry, Intensity is referred to as Saturation.

When we use adjectives such as bright, rich, dull or muted to describe a hue, what we are often trying to convey is its relative intensity (or lack thereoff).


You can Alter the Intensity of a Hue without changing its Value in one of two ways:
1) Add in just a smidge of its complimentary color.   If you're working with red; add just a touch of green.

2) Mix in a neutral grey of the same relative value.  Since the grey is the same value as your color, it will.

Working with paint (one of the easiest ways to play with color), I made some samples:

* Middle: mixed my red with a drop of Sap Green, which is very close to the same value. This lowered the intensity slightly without changing the value much if at all.

* Right: mixed in a neutral grey (made from titanium white and ivory black).  Interestingly, my camera darkened the value of the least intense hue so that it is quite noticeably darker here in the photograph.

Along the bottom row, I started with Cadmium Orange Light, mixed in a little Ultramarine Blue and then mixed in a neutral grey.

To try and show the mixing in another way, take a look at this photocollage of my color mixing: 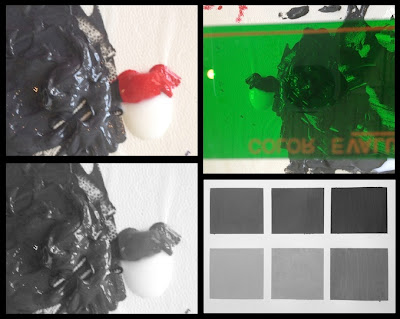 So, my samples didn't turn out quite as well as I'd hoped, but we got to look at another vocabulary term:  Relative Value.  Which means that the apparent value of a Hue can be affected by its intensity.


And last, but not least, two samples again using some of my art work.  My cuff, Spanish Dancer, is bright and lively with a high intensity composition made almost entirely of pure, fully intense hues of each color.  Meanwhile, my Hunting Fae necklace has a more autumnal look with its range of much lower intensity hues.

Posted by Karen Williams at 4:37 PM