Play Dates at the Studio

I've been playing around with ideas for summer classes for weeks now.  (Yes, I'm slow!) The problem: I wanted something lighter and more playful than a standard workshop lineup.  So I came up with the idea of a series of evening 'play dates' in the studio, each with it's own theme, but that build on eachother into something bigger.

For a while now I've been meaning to make some new focals for my beadwork using concrete and resin.  And I decided that would be my theme.

First up - Concrete Cabs on Thursday, June 30th.  We're talking small batches of concrete, mixed in clear plastic drinking cups with all sorts of interesting inclusions possible.  If you keep the mix fairly dry, you don't need to build walls to contain it.  Blue painters' tape holds my focal items in place and with a little luck prevents concrete from sneaking underneath.  You can also draw guides on the tape.

I tinted the concrete with old procion dye mixtures - two different blacks, navy, scarlet, golden yellow, fuchsia and turquoise.  The colors look rather pastel when grouped as they are at right.  That's okay - its rather like adding gesso to a canvas, simply a base layer of color from which to work.

Follow-up and Resin, Thursday July 7th.
The following Thursday, we'll be finishing up the concrete work - sanding, adding additional color with acrylics and rub n buff, and playing with resin.

If you attended the earlier session, resin can be used to 'butter' the concrete to deepen and enrich the colors, add a sense of depth and impart a high gloss finish.

Or you can use resin by itself, embedding beads and other found objects or painted papers and drawings to create unique focals, like the cabochon featured at right.  I used the cab in my December Art Bead Scene challenge piece, Hunting Fae. 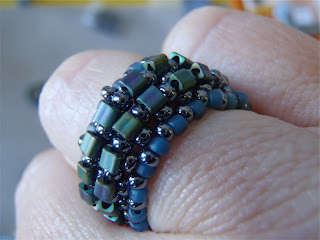 Bead Rings - Tuesday, July 12
These fun bead rings (see more here) are quick to make, fun to wear, and a great introduction to right angle weave.  They are also great practise before setting out to capture a cabochon with right angle weave, since they use many of the same techniques.

Fair warning though - they are addictive to make and all your friends will want one!

Play Date Times
The three above are all evenings, starting at 7:00pm and running until 9:00pm or until I run out of steam, whichever is later at my studio just south of downtown Seattle.


Capturing Cabochons, Sunday August 7th
This is going to take longer than an evening, so carefully scheduling around Mariners' games and Sounders' games and concerts at Qwest field (the tricky part of neighboring two stadiums), I set the date for the first Sunday in August.

Bring your own cabochon, or cabochon shaped object, (or purchase one of mine) and I'll show you how to capture it with a mixture of right angle weave and peyote.  This will be an all day workshop.

The evening play dates will be free, though donations are welcome to help cover materials costs.  And I'll be updating my website in the next day or so with this information and supply lists and such.  I will be charging for the capturing the cabochon class - just haven't quite figured out what yet.  Pricing is always so difficult!

June 23 update:  I  have now updated the calendar at skunkhillstudio.com and added separate class pages for each of the above.   Phew!  I forget just how much work that is.  I'll be adding more pics in the next couple of days, but I'm done for today.

So, if you happen to be in the area and would like to stop by, drop me a line!  I'll send you the addy, directions and supply lists.
Posted by Karen Williams at 5:36 PM