Yesterday couldn't have been more picture perfect - cobalt blue skies and 75 degrees.  With that in mind, I decided to head down to the Pride Parade.

The atmosphere was wonderful, everyone so happy and excited.  The news from New York adding measurably to the excitement of the parade.  Gives me hope that I'll one day be able to attend my friends' weddings just as they attended mine.

I stayed for about an hour of the three hour parade - I was quite a ways back in the crowd and took these pictures by holding my camera well above my head.  I was impressed by the number of corporations had entries - Starbucks, Amazon, Exedia, and Microsoft. 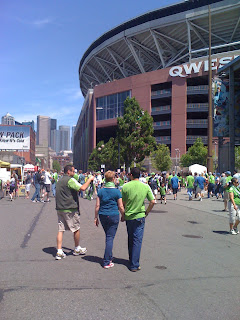 And then I wandered on, walking through downtown heading towards the stadiums and my studio to pick up some supplies.  I found the area hopping with Sounders' fans - a live marching band and tents hawking everything from kettle corn and hot dogs to grilled salmon gave the area a festive, carnival like atmosphere.

And I discovered I'd dressed appropriately to match the fans! The green of my shirt and bag matched the Sounder's green almost perfectly.  Too funny!  (The green tshirt behind me in the pic was not the true Sounders color, which is more chartreuse). 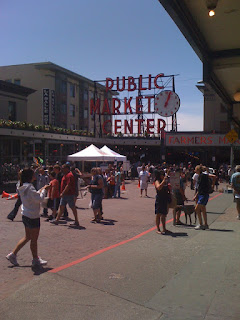 Next up - a quick jaunt back through downtown to Pike's Place Market to pick up some fresh fruit - the peaches are melt-in-your-mouth ripe and the Rainier cherries are in season - it's been a late year for cherries here in Washington. 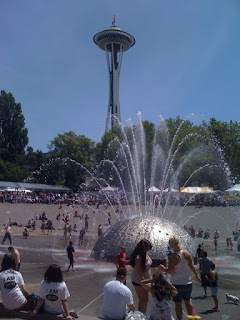 And then on to the Seattle Center.  Stopped for a limonata while watching the fountain dance and listening to yet another live band - rock this time.   Oh, and that's a rainbow flag on top of the Space Needle!

Then back to the Gem and Jewelry show to do some buying.  Then back home.  Reading a book and people watching while wating for the bus.  Traveling entirely by foot and bus, I made it home less than five hours after I left.  I love playing tourist in Seattle!
Posted by Karen Williams at 8:46 AM