Twenty years ago today, we were down to the wire.  Exactly one week until our wedding, less than that until our families arrived from out of town.  We were living in mid-Missouri then, and while we weren't directly affected by the flooding of '93, Columbia had a brief stint as an island as the waters covered all major access points to the city - including the interstate.  But by September 4th, the roads were clear - family and friends flying into Kansas City would be able to make it.

What we didn't know until some time after the wedding was that some of our guests were caught in another sort of flood on their way to the church.  Not being football fans ourselves, we'd failed to note that we were marrying on the same weekend as the Mizzou homecoming game.  The Tigers won - a miracle in that time period - sending a parade of people carrying the goal post through downtown, right past the front doors of the church.  What's a little more celebration on your big day, right?

We'd decided to marry in Columbia, rather than either of our home towns because it was our home.  The home we were making with each other.  And I wanted to share my new home with my family, who lived half a country away in California.  It must have worked - while Joe and I now live in Seattle, the rest of my immediate family is happily ensconced in.... you guessed it, Columbia!

Fast forward a few years and next Wednesday, Joe and I will celebrate our twentieth anniversary. It's funny, because it truly doesn't seem that long.  And it's wonderful, because he's still my very best friend and I'd marry him today if we weren't already married.  But since we are married, we've decided to simply go on a trip and have fun together.

Preparing for the trip, we both agreed that we're going to unplug - no phones, no emails, no conference calls with work.  Why is it so much easier to contemplate that for him than for myself?  I could catch up on my blogging, a sad little voice inside my head cries out.  I could read my friends blogs for a change.  But for much of the time, we'll be out of cell-phone and internet range anyways.  Unplugging really does make sense for so many reasons.

What about my Etsy shop?  I won't be around to answer convos or ship packages.  My best friend who has covered shipping for me in the past will be gone the same time, too.   I debated putting my shop on vacation mode.  I debated deactivating all of my listings except for my PDF automatic downloads.  Instead, I've decided to leave it live for the duration, with a note saying that I will ship any physical orders (kits, beads, jewelry) after I return - so expect packages of that sort to ship on the 23-24th.  Then I decided to add an 'only while I'm gone' listing for the PDF tutorial for my Winter Blues freeform peyote bracelet.  I've listed ten copies - any leftover when I get back will simply disappear.

I've also added a coupon code.  Use HAPPYANNIVERSARY - for free domestic shipping on orders over $20.00 as my way of saying thank you for waiting for your package while we're off celebrating twenty years (and girding ourselves for the next 20).

And for those of you who have made through this post - here's a look at a much younger us: 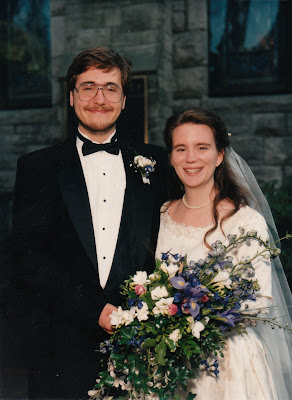 Posted by Karen Williams at 6:04 AM