This week's challenge, Feel the Love,  nearly stymied me.  It was forefront in my mind Thursday as I hopped onto a bus while running errands downtown.  The bus was strangly full, with several adults just standing in the aisle, looking at the back door as if they planned to exit, but not moving. 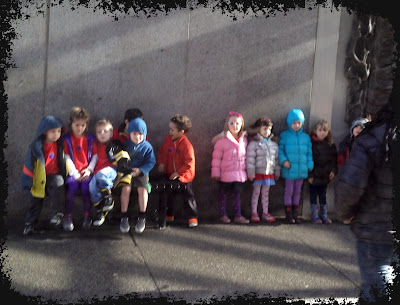 Confused, I glanced out the window just in time to see a child burst from the bus in an explosion of color and fly across the sidewalk to the wall, where he hopped up onto a bench next to his friends.  As I watched a line of children slowly appeared - one at a time bursting from the bus at weighted intervals (their little legs having to climb down the steep bus stairs).  Each was invisible to me until they lit on the sidewalk outside.  Each flying to the wall to join their companions as if drawn by some natural law.

This has to be one of the grayest bus stops in the city, but not on Thursday.  On Thursday six brightly colored children filled the bench that on a normal day barely seems to accommodate two adults, the fifth boy drawing the sixth into his lap, while the girls lined up alongside, shoulder to shoulder.  I knew I had to snap a picture.   I caught this as the bus started to pull away.

So that's my entry.
Thanks for stopping by!  Now go on by Sally Russick's blog and check out what the others found for feel the love.

Posted by Karen Williams at 7:04 AM

Email ThisBlogThis!Share to TwitterShare to FacebookShare to Pinterest
Labels: Focus on Life, story