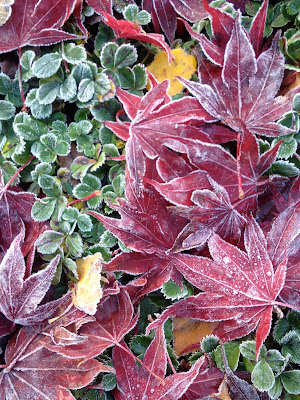 Can't believe it's been a week since my last blog post!  It's been rolling deadlines for the past month and looks likely to continue through Bead Fest at the end of this month.  But I did get the class proposals in last week, and just submitted my book project for review - should hear back on that by tomorrrow, keeping my fingers crossed.  In the meantime, I've promised to write a post on complimentary colors.

Fall is my favorite season.  I love this time of year, as Summer and Winter fight it out for supremacy. The days are still sunny and warm here in Seattle, but the nights are cool and chill.  We're still using our summer sheets, not quite ready for flannel yet, but I had to find an extra blanket for the bed.  And I love the colors.  One of the trees outside our house has turned a bright scarlet while the other is still mostly green - a perfect complimentary color combination.


Everywhere I look the trees are layered with red, orange and green leaves.  And since we're at the end of the dry season, there's golden brown grasses and bright blue skies.  It's funny that once the rain begins the grass will green back up and stay green through the winter, but our 'sunnier' days will tend to have bright white skies instead of blue.  So I'm definitely enjoying the blue while we have it.  To top it off, the sunrises lately have been magnificent; in shades of violet and purple and gold.


Like Summer and Winter, complimentary color combos draw both warm and cool temperatures into play.  You're pulling not only from opposite sides of the color wheel, but also from opposing color temperatures.

Take the Blue/Orange compliments: here you're combining orange, the hottest color on the color wheel, with blue the coolest.  This makes for a particularly dynamic color scheme, but also poses its own sets of problems as the two vie for dominance.


I created my Autumn Rain freeform peyote bracelet nearly five years ago now, attempting to capture the particular colors of the season.

It's funny in that I usually think of it as "red", but in truth, it has a strong green component.  The green is simply more muted and darker, taking on the role of branches and shadows while the reds do their best to steal the show.

I also love how the transparency of the beads, glowing just the way that fall leaves do when the sun hits them just right.  I've never been able to capture that as well in any other medium. 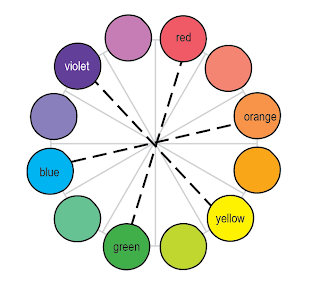 Looking at the combinations on a standard color wheel, I noted the following, which I thought I'd share:

Red and Green: smallest value contrast of the complimentary combos, some color temperature contrast, too.

And if you mix two compliments together, you end up with really interesting neutrals - sometimes greys, sometimes blacks, sometimes browns.


It's funny, but I really don't seem to use the purple/yellow colorway in my beading.  Looking through my work, the closest I could find was a thread painting sample I made years ago.  It's free motion embroidery, which I haven't touched in ages but is very nearly as slow as bead weaving.

Think I may have to look at a project in purple and gold.  In November.

For now I'll just keep trucking away.  And in the meantime, I'm slowly adding to my latest Pinterest Board on, you guessed it, Complimentary Colors.

Posted by Karen Williams at 8:40 PM