Years before I started Baublicious, my husband blogged. He was one of that first wave of bloggers, and even attended regular meetups here in the Seattle area. I thought that was one of the weirdest things I'd ever heard - lots of people who wrote about totally different things getting together to what? Type together? Well, the last laugh is definitely on me as I've now taken over the role of active blogger in our household, and have attended my own share of various types of meetups. 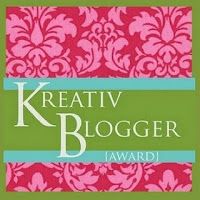 Unfortunately, most of my blogging friends live no where nearby, but are scattered around the country and around the globe. Wish I were rich enough to travel around and visit them all! In the meantime, seeing my name pop up on a friend's blog is almost as exciting as an actual visit. I do a happy dance, drag my husband over to the computer to show him, smile like a loon and generally carry on. Now that you have that visual, you can imagine my delight when Christine over at One Kiss Creations named me (and nine others) a Kreative Blogger. Woo hoo! Thank you Christine - you are truly the best! And I absolutely love that you thought of me.


The thing is, it's a little like one of those chain letters - where I'm supposed to  name ten bloggers who inspire me and they're each supposed to name ten who inspire them, and so on. You're also supposed to write seven things about yourself that people might not already know.  (See how I tried to distance myself from that with the third person?  Hmm)

And I found myself with a conundrum: this reminds me a bit too closely of one of those chain letters that I make a point of not forwarding.  But I think the idea is cool; an interesting challenge.  With hardly a thought I came up with ten people I'd love to name, so I decided to give it a go.  If you're on my list, you can perpetuate this thread or not as you wish, but know that I think you truly rock!

The harder part was coming up with seven odd facts about myself (besides the one's I already listed above), so I started there.  Here goes:

1) I'm a Valley Girl. Literally. I grew up in the San Fernando Valley when Valley Girls were the rage. But I never could talk like a proper valley girl. Very sad at the time. Much rejoicing in retrospect.

2) While I dearly love my family, I hated LA and escaped the day after I turned 18, running away to college. Where'd I go? To a teeny tiny college in Iowa called Grinnell in an equally tiny town of the same name. It's an amazing school, and several of the people I met on my very first day of college are still my friends today.

3) I majored in Russian - language, literature, culture and history. I spent the first semester of my senior year in Moscow. I thought I was headed to the Soviet Union, but my flight was delayed by a little politcal unrest called the coup. I flew out three days later instead and arrived in Russia. The tanks were gone, but there were still baracades in the streets that first week. So I got to watch the transition first hand from my dorm on Octoberskaya Ploshad (October Square) in the heart of the city.

4) When I was a child, the doctors feared I'd be blind by the time I was an adult because my vision was failing so rapidly. I needed a new prescription every six months or so. For most of my life, my nightmares revolved around just that - I'd dream that I was trying to read a book and all the text would disappear from the page. Or that while hiking on a mountain I'd lose my glasses, not be able to see them to find them, get dizzy, and fall off the mountain.

By my late 20s, I was nearly legally blind even with my glasses. I started beading (with seed beads) during that time because my mother-in-law was a beader, I loved the colors, and I wanted to prove to myself that I could. I still thread my needle more by feel than by sight.

5) A little over ten years ago, I had my own personal miracle in the shape of a series of eye surgeries, which restored my vision. I am still almost completely night blind, and I have crazy, fluctuating depth perception. But I can SEE! I can SEE! And just typing that makes me so happy I could cry.

Thank you Mom and Dad for pushing me to have the surgery, even when it scared me half to death!

6) I love Disney. I know a lot of people have a lot of issues with the company, and I can agree with many of them. But I have a different sort of relationship with Disney. Growing up in LA, my Dad worked for Imagineering - the division that designs the Parks. Going to work with him meant peeking into the costume shops, seeing animatronics put through their paces in the warehouse, visiting the model shop, looking through pages and pages of story boards. It was like drinking from the fire hose of creativity. And when I visit the parks that's what I see - all those amazing, wonderful artists and craftspeople and the magic they create. Anything seems possible.

7)  Leaving LA, I swore I'd never live in a big city again. Well, it's been almost eleven years since our move to Seattle, and I can't imagine another place I'd rather be. Guess not all big cities are the same. I especially love our summers. It's supposed to be HOT today - all the way up to 81F! But it's 64 right now, as I sit typing this at our favorite neighborhood coffee shop and that feels about perfect. Yes, we're all heat wimps here. :)

This post is already too long and I've run out of time, so I'm going to break it into two parts and give you my honor roll list tomorrow so that I can do it up right.
Posted by Karen Williams at 2:39 PM