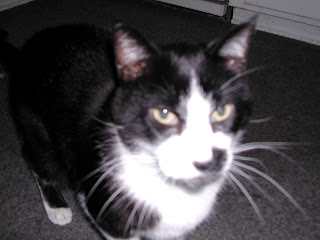 Wormwood loves food, and is pretty sure we'll forget to feed him if he doesn't remind us.  Repeatedly.  Loudly.  Starting a couple of hours before his actual feeding times.  We're used to that.

But last weekend, he began yowling randomly throughout the day, and night.  And the boy has quite the set of lungs on him.  We're talking the volume of an air raid siren with all the terrible sorrow of a wailing banshee.  Ouch!

He was eating and drinking, and abdominal palpitations showed no signs of a UI tract infection, so we started to chalk it up to lack of attention.  There's no doubt he's lonelier, these days.
But I had a nagging worry that this just wasn't right, especially when he started eating a little less than normal.  He wasn't acting sick per say, just different.

So on Tuesday, I took him to the vets, who luckily didn't treat me like a total idiot for coming in saying "my cat's acting different", but gave him a full check-up with blood work (he's had some thyroid and kidney problems, so they're quite familiar with our boy).

Friday, we got the diagnosis - feline diabetes.  And I've now learned to give my cat insulin injections, which are surprisingly easy and he doesn't seem to mind at all.  They're harder on the humans than the cat, so far.

But the reason for this post is it could have been a lot worse.  If I had chalked his noise up to his being an old, cranky, lonely cat, his prognosis wouldn't be good (and we would have dealt with many more nights of poor sleep all around before the end).

So, don't feel shy about calling your vet's for a consultation when your pet is acting "strange".  You know them far better than anyone else.
Posted by Karen Williams at 12:32 PM