My weekend was a celebration of women.  On Saturday, Joe and I attended the incredible Womxns' March here in Seattle.  It seemed like the march was all anyone talked about in the week beforehand.  The local coffee shops were abuzz with who was going, who was meeting whom, who was knitting hats for whom.  I'd swear that in our neighborhood, it was more anticipated than Christmas.

The morning of, we headed down to El Diablo early, to find it almost empty.  We watched as one group of pink-hatted women after another dashed in, grabbed coffees, and dashed back out.  We also watched the metro buses gliding through the neighborhood packed with pink hats and signs.

We'd planned to meet friends at the coffee shop, then head over to the first stop on the 4 route about 10am.  We could see the corner, and the 40-50 people waiting there from our window seat, so we decided to head over way early.  As we waited, we watched the line grow, then shrink (then grow again) as people bailed to grab an Uber or other transport.  What was really neat was everyone worked to fill their vehicles to capacity, grabbing other people from the line. You'd hear the call, "we have one more space" and someone else would hop out of line and join them.

When we finally bailed, we did the same and brought a new friend from line with us, walking to another friends where her husband had arranged an adhoc carpool, piling ten of us into two vehicles (plus the 2 drivers).  Good thing too; the bus arrived as we were pulling out, and it was already so full that it didn't even stop where we'd been waiting.

On the drive to Judkins Park (the starting point of the route), every bus stop we passed was filled with pink-hatted, smiling women (and a fair number of pink-hatted men, too).  Truth is, we never actually made it to the park - by about eight blocks out it was obvious we'd have to go the rest of the way on foot.

Abandoning our drivers with many thanks, we walked another couple of blocks before the crowds simply got too thick to get any closer.  We ended up at 20th and Jackson.  Turns out none of our group had remembered to download a map of the route onto our phones.  So I asked one of the very nice policewomen for assistance and discovered that we'd accidentally found the actual starting line for the march - with a Native American group lined up right behind the police on bicycles.


Despite watching the start of the march, it took another 40 minutes before we made it out of the first intersection, and another 20 before we'd traversed another block.  There were so many people filtering in from so many intersections that it took forever to move more than 2-3 steps at a time.  But that was okay, because everyone was smiling, everyone was simply so happy to be there, to see the amazing turn out. And it was fun to read everyone's signs.

The signs ran the gamut of causes.  Many I believed in wholeheartedly, some were simply not my causes, and a few I didn't agree with at all.  But that's okay, because it was all about free speech and solidarity. Being able to speak one's truths and knowing you're not alone. That's why I was there.  After last year's brutal election cycle, many have been left fearful and hurting.  I wanted to be there simply because it seemed right to stand up and say 'I care, I'm paying attention, and you're not alone'. 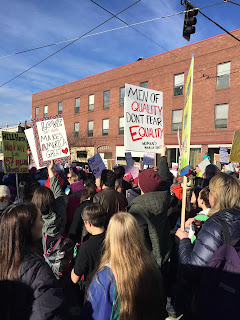 One of my favorites was a hand-drawn sign carried by a little girl, maybe 5-6 years old riding on her dad's shoulders.  Her sign read 'Make America Kind Again'.  A goal I can definitely get behind.  It was fun walking with our little group of six women, three teenaged girls and two men.  Even when it was tricky keeping us all together in the crowds. Thank you Joe, for walking with me, and for sending the text last week, asking if I wanted to go on this particular 'date'.  Thanks Jen, for sending the text 'Come to our house now', and for organizing the impromptu carpool.  And thank you Spencer for playing chauffeur.

From Judkins Park to the Seattle Center, the full route was 3.6 miles long.  Based upon aerial photos I saw afterwards, we filled the entire route!  The first people were arriving at the Seattle Center before the last marchers had left Judkins Park.  Estimates this morning say there were as many as 175,000 people.  It was an incredible feeling to be part of such a crowd.  A peaceful, happy, smiling group of people from so many diverse backgrounds, coming together to participate as a community.

Arriving at the Seattle Center felt a little anti-climatic.  My feet were sore, and I was ready to be off of them.  But at the same time, I was riding high on the energy of the event.  It was so powerfully positive.

Even the amazing bicycle police along the route were smiling, and wished us well along the way.  I want to sing out many praises for the women and men of the police force - thank you for being there, thank you for supporting the constitution, the 1st amendment, and your fellow citizens.

And if the march wasn't enough to make me smile, Sunday was Seedbeaders.  This was the first time I'd managed to make it in about a year - I don't think I attended a single meeting in 2016.  Walking in the door, it was like old-home week, with so many friends I hadn't seen in ages.

January's the month where everyone is asked to bring ideas for mini-workshops they're willing to teach at the monthly meetings through the year.  All of the meeting projects are free - members donating their talents to the rest of the membership.  I am so very impressed by the talent and generosity of everyone in this group.

This month, Jennifer Porter was teaching her version of embellished, random right angle weave.  One of my besties, Jennifer and I have a similar vibe (and tend to inspire each other) with our work as we're both drawn to freeform bead weaving.  (If you're wondering why her name sounds familiar, she is one of the featured artists in Explorations).

Jennifer let me snap this picture of her talking about random right angle weave, and then a couple pictures of her work.  I'm including my best photo below (definitely not a studio setting - so the photos not as good as I'd like).

A bright cherry on the Sunday goodness - it turns about a dozen of us from Seedbeaders had attended the march, and we all had different stories and highlights to tell.  I'll admit, I'm still buzzing from my wonderful, incredible women's weekend.

Good thing, too, because next up on my to do list today is State taxes for Skunk Hill Studio.  Yippee!
Posted by Karen Williams at 10:27 AM