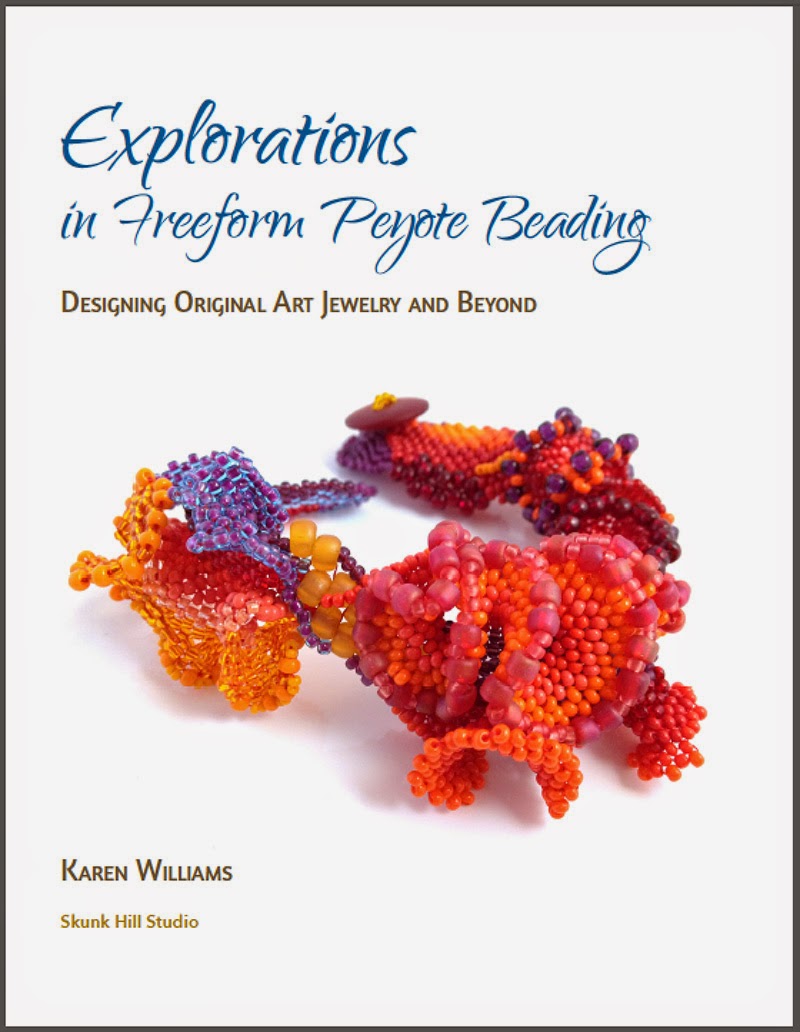 Welcome to day one of the Book Blog Tour for Explorations in Freeform Peyote Beading!  This week five of the contributing artists and I are celebrating the book's publication with a virtual tour.  There will be new posts each day and a chance to win door prizes!

Leave a comment at each blog for up to a total of eight chances to win.  Prizes listed below.
Behind the Scenes - like the special features section on the DVD, here's a peak into a few random facts about the creative process behind Explorations.

Inception Date:  One year ago today I launched the Kickstarter to support the book's production.   After several months of debate and planning, I fully committed to the project on January 15, 2014.  The Kickstarter was my way of introducing the idea to the world and saying 'Hey, what do you think?'   After that, there was no easy way to back out - it was full steam ahead until the project's completion.  That was one of the scariest days of my life.

Looking back at my Kickstarter proposal in preparation for writing this post, I was pleasantly surprised to note the finished book is remarkably close to my original vision.  Surprising because it seemed like the book and I wrestled constantly over the direction it would take.  Watching my little video, I realized I very nearly have a book trailer!  It would need a better audio track though;  I sound like I'm in a wind tunnel.  Maybe once I finish the Kindle and ePub versions.

By the numbers:  All told, Exploration's 174 pages includes images of ninety three pieces by twenty two artists (including myself) from three continents and four countries.  Detailed photo essays give a closer look at the construction and/or design process for twenty nine of the pieces, ranging from earrings and brooches to bracelets, necklaces, beaded bottles and even three-dimensional beaded fish.

Contributing artists:  The sheer talent of the contributing artists is inspiring.   Some I knew beforehand, many were new to me.   I didn't know it at the time, but I fear I may have bullied Cynthia Machata into creating her first freeform peyote necklace for the book.  I can't feel too badly about it because her Surf necklace is truly stunning.  Mary Foyes and I went through several rounds of photographs of her First Holy Communion Veil before arriving at the final photos, taken by Shauna Ploeger.  They are some of the finest in the book, and include the only photo in the entire book with a live model.   I felt a bit like a stalker, contacting Ibolya Barkóczi to ask if I could use one of her bracelets to illustrate working along the width.  Luckily she said yes and graciously sent several photos from which to choose!

Beta Testers:  Borrowing from the software industry, I released six Beta versions to a subset of my Kickstarter community, sent once a month from June through November.  The first Beta was embarrassingly low on content.  Only 25 of the original 150 pages had anything on them besides the page headers.  Of the twenty five pages with content, many boasted a single image as a promise of what was to come.  I credit those Beta releases with keeping me honest and keeping me on track.  Knowing that forty-two people were waiting to see what I'd accomplished each month was a great motivator to stay on schedule.  Especially after my initial embarrassment. 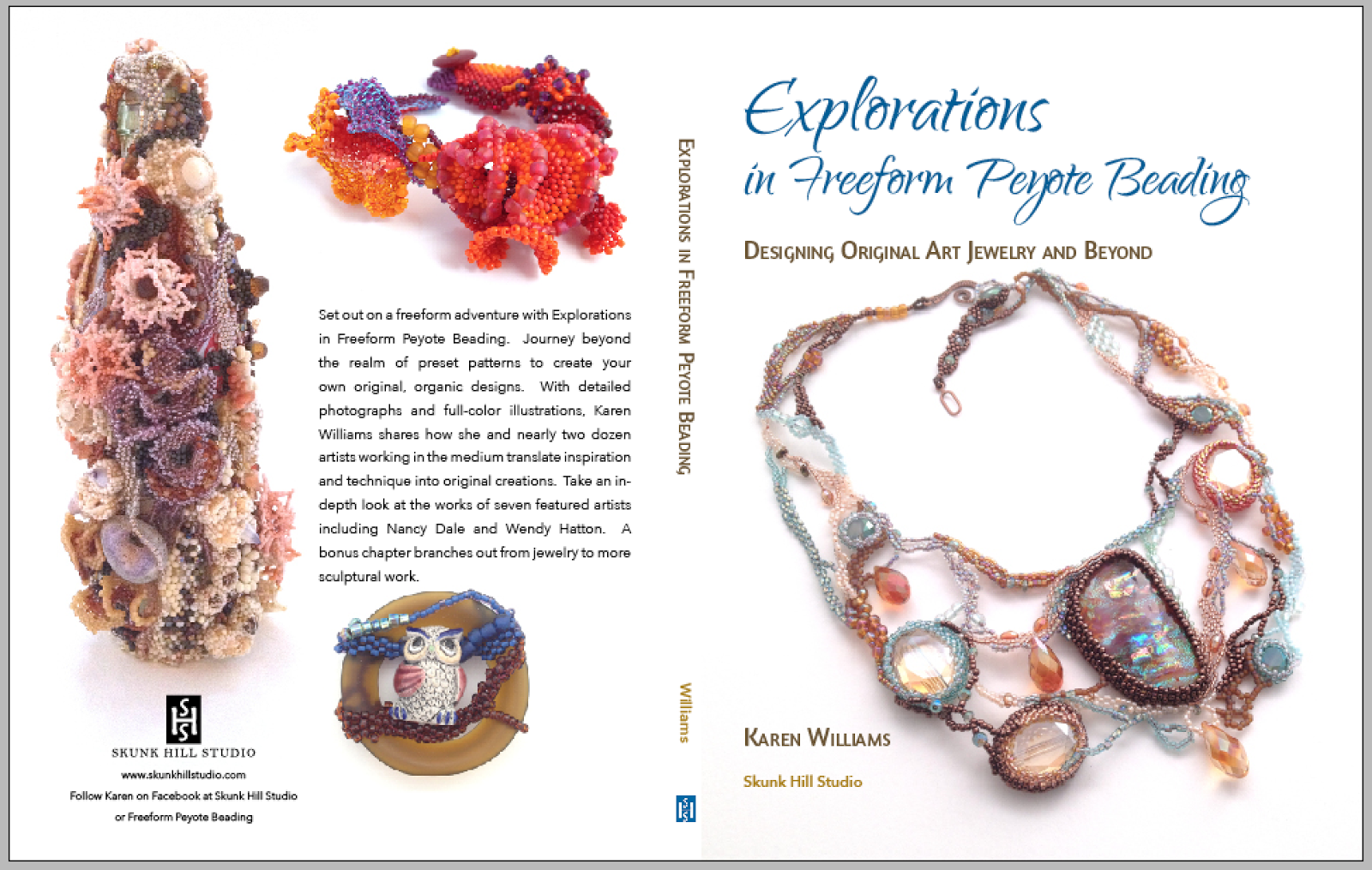 Cover Image:  At right is my earliest version for the book's cover.  The only image carried over to the final cover is my Coral Dancer bracelet.  In the proofing process, I ended up having the printers run two separate physical proofs.  This is the cover for the first proof.  The final cover was one of three I designed and was the overwhelming winner of a cover contest I ran with my Kickstarter community.  The final cover back includes the works of my seven featured artists, which pleases me.  But I still really like this cover, too.

Door Prizes
No party is complete without Door Prizes!    I am super excited about this Blog Tour and put together prizes with lots of freeform beady goodness to celebrate.

updated 1/25/2015 - the prizes have grown since my original announcement, largely thanks to JJ Jacobs of Creative Soul Revival.

Grand Prize:  a signed copy of Explorations, along with a complete set of ten postcards with images from the book, AND a Bead Soup mix based around a lampworked bead(s) by artist JJ Jacobs.  Her fused glass cabochon was the inspiration for my Opal Essence necklace (shown in my alternate cover above).  She's sent me a similar fused glass cabochon, and I've put together a bead soup in blues sufficient to make a similar necklace should you desire. ($100 value)

Second Prize (2):   a Freeform Bracelet kit (beads only) to make your own version of my Nautilus Flower Cuff OR Demeter’s Harvest Bracelet.  I will draw one winner for each bead set.  Each set will include all of the beads, including the closure, to make a bracelet similar to mine.

Third Prize (2):  Small bead soup mix and postcard set.  This set will include enough beads to make a smaller project like a Personal planets beaded bead, pendant or several rings.  These prizes have grown, again thanks to JJ Jacobs!  They now include bead soup mixes with three of JJ Jacob's Waterdrop 'sea glass' beads.  You can see more of her beads here!

Contest Rules
Entries:  One comment per person per blog post for a maximum of eight chances to win if you visit and comment on all eight blogs.

Please help spread the word on Facebook, Twitter and other social media!  No extra entries for this, but lots of good karma for helping support and promote independent artists.

Make sure that there is an email associated with your comment!  I will contact the winners by email by Thursday, January 22nd.  If I cannot reach you by email, I reserve the right to choose another winner.  I'll post the winners on my blog on Saturday, January 24th.

International visitors are welcome to enter.  I'm willing to pay up to $10 worth of shipping for each prize - if shipping costs more than this, you would be responsible for the extra shipping.  Once I have your postal address, I can give you specific shipping costs.  As an alternate, you may choose to receive a digital copy of the book instead of your regular prize.


Thanks for checking out Explorations in Freeform Peyote Beading!  Have fun hopping this week, and be sure to check in next Saturday to see who won the random drawing!