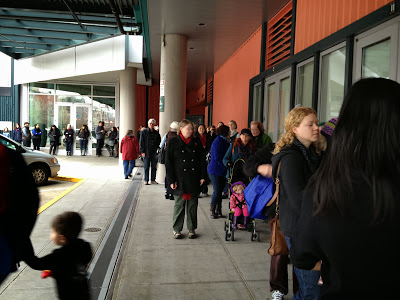 I arrived for my volunteer stint a little before the doors were set to open on Saturday and found this line waiting to get in to the 2013 Etsy Rain Holiday.

Guess I didn't have to worry about the change of venue (last year at the Seattle Center, this year at the Cruise Terminal on the waterfront).  Entry to the show is free, but the first fifty people through the doors each day received wonderful gift bags filled with cool stuff from the vendors.  Boy are those bags Popular! 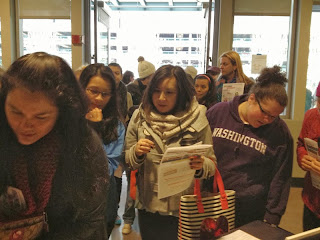 I spent the first hour or so simply greeting people as they walked through the door, then I got to wander the floor spelling vendors who needed a little break.

It's both fun and slightly awkward jumping in to man someone else's booth.  "Hi!  Aren't these things great?  Nope, they're not mine, I just get to pretend they are for another fifteen minutes or so.   Ladybugs?  Uhm, yeah, I think I saw some of those a moment ago.  Let's look and see what we can find...."


But cruising the show itself was great fun, so I made a little Treasury to share some of my favorites.

And here are a few call outs for my favorite favorites:

Edibles:  Sweet Caroline Jams are sooo incredibly yummy!  I bought some last year to give as gifts, but ended up keeping them for myself (oops!).  This year I came home with a little jar of Winter Spiced Blueberry.  Some of her other flavors include "Masala Chai Spiced Apple Butter" and "Pomegranate Lemon Jelly".  I love her stocking stuffer sized jars - great taste-samplers, amazing flavors and the empty bottles are so pretty, they make great storage containers in the studio, so it’s a triple win.  Score!

For sheer coolness factor, Mortar and Pestle's booth stole the show.   A purveyor of fine teas, tisanes and mulling spices, their booth felt like you'd stepped into a 19th century shop with a Steampunk flare all the way down to their costumes (take a look at their website and you'll see what I mean).

They even offered freshly brewed samples of their various teas at a beautifully appointed tea bar at the back of their booth.  I came away with a double package of teas wrapped as letters to Santa (like the ones in the top left of the photo).  Won't say who on my list it was for, in case they happen to read this.


Illustrations:  I fell in love with the Mysterious Monster illustration by Pricsilla Jo and spent way too much time trying to figure out who on my Christmas list (besides myself) might want one.  I love her style, and I love all the little sea critters in this piece in particular.

DIY:  Who doesn't love owls?  Reinvented by Me has lots of great patterns, including a fun stuffed Owl pattern that promises to show you how to make ten different fabric owls.  Enough for every Strigiforme lover on your list!  (Psst... Did you know that a group of owls is called a Parliament?)

MayhemHere has a cool take on the ‘paint-by-numbers’ gift with their Zentangle your Own Animal cards complete with card, brush, paint and a tip book.  Some of their other work is a bit creepy for my tastes, but they have the coolest Totoro print.  If I’d seen that at the show, I would have totally picked it up for Joe for Christmas.


Table Toppers:  I'm never quite sure what to do with them, but Sparrow and Sundry's shadow boxes were a blast to look through.  To add to the coolness factor, she's made use of modern LED technology so each of them has a little light (she includes extra batteries with each purchase, too!)

This was one of the booths that I babysat for a bit, and I had a great time chatting with passerby about their favorites.  I even made a sale!

Here's a Full List of the vendors and their websites/Etsy stores in case you'd like to browse some more.

I also learned more about Etsy Rain's imminent name change, the whys and why it's so cool.  But that's food for another post.
Posted by Karen Williams at 12:47 PM