A Weekend Getaway - The Olympic Penninsula

For the past few months, my husband has worked crazy, crazy hours.  He's working for a start-up (and loves it) where they've just launched their first product, hence 7-day work weeks and 12 hour days.  But, last week they gave him two days off as comp time!  Really!  So, with minimal planning, but lots of excitement, we headed off to the Olympic Peninsula.  It's one of our absolute favorite places on earth, and close enough to pop over for a weekend, especially for a long weekend.  Definitely one of those things I love about living in Seattle. And a must see for anyone visiting the area.


Rather than lots of text, I thought I'd mostly share some pics of our trip and try to show you why this is one of my favorite places on earth.

Yes,  I did say rain forest!  The Olympic Peninsula has one of the few temperate rain forests in the entire world.  If you want to see moss growing six inches deep over everything, this is the place to come!  We stayed in a cabin at the Sol Duc hot springs the first night.  The hot springs were open until 8pm, so you could go out hiking, then come back for a nice soak.  The water may be a little smelly, but boy did it feel good! 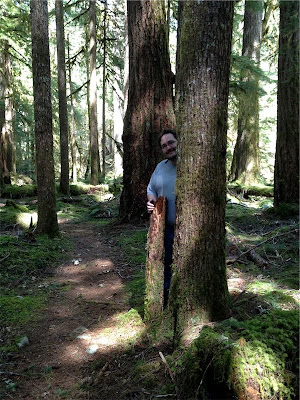 On Friday we drove around the peninsula heading towards Lake Quinalt.  On our way we stopped at several of the beaches, including Ruby Beach, where we ate a picnic lunch amongst the driftwood, checked out the sea stacks exposed by the low tide and skipped rocks into the surf (this beach is covered with flat, rounded rocks perfect for skipping).  I'm really hit or miss with rock skipping, but I keep trying!  :)


Lake Quinalt Lodge is sort of our go-to place for our trips to the peninsula.  The lodge itself is along the lines of the old national forest park lodges like Yosemite, but on a smaller scale.  The main lobby is filled with comfy leather couches and chairs where you can curl up with a book, and tables where you can play games, put together puzzles (or bead!).  There's even a bar that serves drinks through through out the day.  If you want to play bocce ball or croquet out on the lawn, they'll loan you the sets, you can rent a row boat to explore the lake, hike the glorious rain forest trails (Lake Quinalt is another Rain Forest valley) or simply take it easy.  We tend to do a little of everything, though we we've never actually been out on the lake.  Normally it's too cool and they're not renting boats.  This time, I think we were just being too lazy, despite the warmth of the weather.

So, now that I've shared one of my favorite places, what are some of yours?  One of those places where you find yourself returning year after year, drawn like salmon returning to its home stream (though hopefully with better consequences).
Posted by Karen Williams at 9:21 AM