I apologize to everyone for being gone for so long.  I could claim it's because I was on vacation, but the truth is I scheduled the last two posts for while I was gone.  Vacation was wonderful.

The hard part was returning - we've been home for a week now and other than an hour of sun yesterday, it's been cold, wet and rainy pretty much ever since our return.  The studio seems extra quiet now too, after a week of hanging out with my co-conspirator (aka my husband).

So where did we go, you ask?  We went to the Aulani, the new Disney resort on Ohau and pretty much stayed right there, enjoying everything the resort area had to offer.

Playing in the public lagoon in front of our resort, we saw a sea turtle, then later we went on a snorkel trip where we saw far more.  They are so large and it's fascinating watching them swim.  Though their flippers move in what seems like slow motion,  they cut through the water so fast!  It's easy to underestimate their speed when you're simply watching their flippers move.

I also snorkeled in the private reserve in Aulani's water park area.  It's small, but stocked with fish from around the islands.  Far more than I've seen on many a snorkeling trip and great fun at feeding time, when I could swim through swarming schools of fish and feel their swift movements in the water all around me. 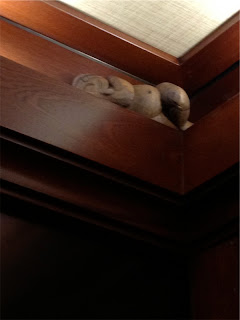 One of Aulani's major focuses is on traditional Hawaiian art and culture, which inspires the entire hotel.  Some of the touches are whimsical, like the Menehune hidden throughout the resort area. Like this little guy at left, hiding in plain site near the ceiling in one of the elevators.

Other touches are simply beautiful.  The curtains and shower curtains in our room featured kapa style prints.  Kapa is the traditional Hawaiian bark paper.

And one day a week artisan Dalani Tanahy comes to Aulani to share her experiences and knowledge in this artform; it's history, the tools and materials and the challenges modern kapa makers faced helping to resurrect the knowledge from old accounts and extant artifacts as all of the original kapa makers were gone.


Throughout the week, Disney offered a wide range of arts and crafts classes on traditional Hawaiian classes.  Some free, some for a small fee.  My favorite by far was one I almost missed.  The day before our snorkeling trip, I discovered that Kuahiwi Lorenzo would be teaching traditional Hawaiian feather work at the same time we'd be out on the boat.  But, he'd be doing a presentation at the artisan's corner later that day, after we were back.  So I sought him out, and asked enough questions that he ended up offering to give me an impromptu feather working class.  I hadn't realized, but in ancient Hawaii, bird catching was a special occupation, where they learned to trap the birds without injuring then.  Once caught, they'd remove a few feathers from each bird, then release them so new feathers could grow.

The project he started me on was supposed to be a feather bracelet lei made from dyed turkey feathers.  I worked on it for a while with him, then later.  But then I started wondering what would happen if I added beads.  So you can guess where I went from there, working from my traveling bead box.  I got most of the way during vacation, but finished up the last of it after our return home.  Definitely room for exploration here!

So what finally prompted me to break through the silence that's been stifling me since our return?  A wonderful little package from Bobbie over at Beadsong Jewelry.

She'd hosted a giveaway to celebrate her 100th blog post and I won these wonderful swirl beads from Thornburg Bead Studio.  They just arrived in the mail yesterday, bringing with them the promise of spring.  Thank you again Bobbie!
Posted by Karen Williams at 4:37 PM