Blogging Away from Home I have this dream of blogging while traveling using only my iPad2, rather than having to lug around my antiquated and heavy laptop.


It seems like it -should- be a simple dream, but Blogger's web interface for the iPad leaves much to be desired. I'm forced to work in HTML mode to type my posts (no visual editing) and in many cases I'm forced to add coding by hand.   Even where I don't have to add the code myself, I find that all the markup makes it difficult to see what I've actually written.

The image at left is a screenshot of the Blogger interface on the iPad. 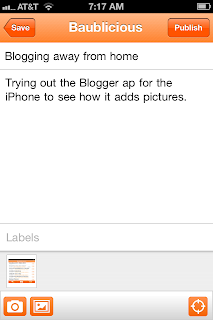 But worse than dealing with the HTML mode has been finding an easy way to upload and place photos from my iPad. This is impossible through Blogger.  The screen looks like it should work, but doesn't.  Back in the spring, before our Alaskan cruise, I purchased a camera connection kit to easily load photos from my camera and iPhone to my iPad. That worked, but Blogger on the Internet could not find my camera roll. It simply didn't work like a laptop. I finally figured out that I could upload the photo to Flickr, then link to it from there, if I could figure out the exact web address for the image (not the page), but that's too complex to be easy!


Last week I used the iPhone app 'Blogger' in writing my last post for 2011.  It allowed me to add an image directly to Blogger from my iPad or iPhone, but with only the most basic formatting, and no control over placement. Once it was placed with the Blogger app, I could bring it up in the Blogger web interface on my iPad.  There I could at least move it to where I wanted it in the text by copying and pasting the code, but I couldn't change its alignment (default is centered, with text above and below).  Nor could I add a caption without doing a lot more coding or copying and pasting from other blog posts (more than I was comfortable doing). So then I tried out Blogsy, a $5 app for the IPad. It does have a visual editor, as seen in my screenshot at left, though it's quite quirky when you start adding images. This paragraph ended up embedded in the image link and I had to go into the HTML code and copy, cut and paste to dig it back out, for instance.

I'm supposed to be able to able to drag and drop images around once their placed in the post, but that seems to do terrible, terrible things to the code, which I then have to fix.   Also I can align photos to the left, but when I try to align them to the right, the surrounding text follows suit. Not so good.  And I still can't add captions. (I added the right alignments in Blogger borrowing my parents' computer - cheating a little.) Blogsy does indeed link to my camera roll as promised. Sort of. Turns out you have to set up a Flickr, Wordpress or Picasa account, then when I open my camera roll I can drag the photos I want over to Flickr. Not ideal, as I don't necessarily want these screenshots in my Flickrstream. Why can't it simply upload to Blogger?

On the plus side, I have figured out how to transfer photos between my iPad and iPhone using iCloud, so that's a win.  But blogging on the go using my iPad is still not an easy prospect!


So I'm still hunting for a better solution. 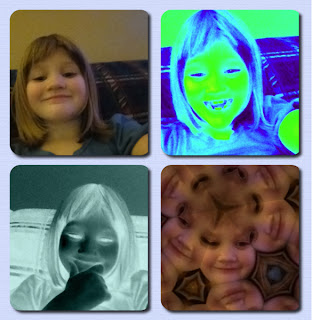 A silly, but fun addition to the plus side: during the search for blogging software, I've found FrameMagic Lite, a fun photo app which lets me put together photo collages very quickly and very easily.  It took me a minute tops to make this collage of photos my niece Emme took of herself using Photobooth.  The longest part was choosing between the slew of images!

FrameMagic Lite is free.  Their paid version would give me more layout options.


So now, do any of you have favorite blogging software for the iPad or iPad2?  One's that let you add and manipulate images from your camera roll without uploading them first to Flickr or another online site?  Especially for Blogger?
Posted by Karen Williams at 7:54 AM